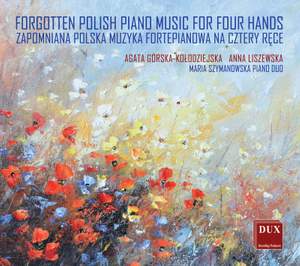 Chopin: Introduction, Theme and Variations on a Theme of Moore

Maria Szymanowska Piano Duo is formed by two pianist associated with the Academy of Music in Łódź. The guiding thought of the joint activity adopted by the artists is to promote Polish music and works of less known composers, whose pieces are gradually being forgotten. Polish music, to which the present CD including four hands piano music is dedicated, occupies a special place in their output.

In the 19th century, the piano was both a concert instrument and a necessary accessory of the social life in bourgeois homes, palaces and manors. Inevitably, the salon music was treated by the most accomplished composers more as elusive entertainment than serious work. Therefore, a relatively small part of this type of compositions was published and propagated during the life of their creators. Restoring them to the cultural circulation requires time and tedious search among manuscripts and old publications. However, the effort leads to a reminder of genuine musical gems and figures of their creators.