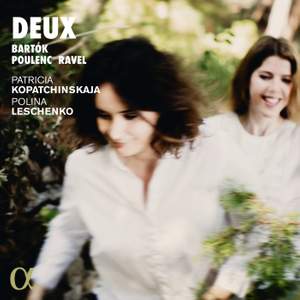 Playing of such consummate ease combined with involvement and attention to detail...Simply, this is one of the finest, most musically sensitive recordings to have come my way for some time, and... — BBC Music Magazine, April 2018, 5 out of 5 stars More… 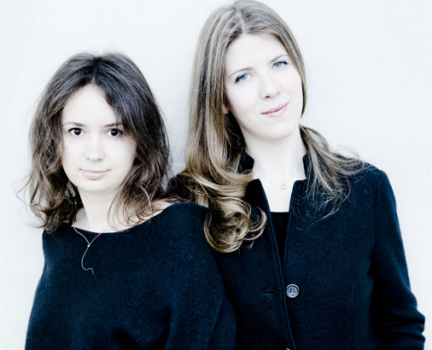 Recording of the Week,  Patricia Kopatchinskaja and Polina Leschenko perform music by Poulenc, Bartók, and Ravel

For her third album on Alpha, Patricia Kopatchinskaja is joined by a highly talented pianist whose approach to music is as extremist as hers, Polina Leschenko. Together they explore pieces that have many points in common. The Hungarian violinist Jelly d’Arányi, grandniece of Joseph Joachim, was a "muse" to both Bartók and Ravel. In 1922 and 1923, she premiered the two Bartók sonatas for violin and piano and Ravel dedicated Tzigane to her. He wrote to Bartók: "You have convinced me to compose for our friend, who plays so fluently, a little piece whose diabolical difficulty will bring to life the Hungary of my dreams; and since it will be for violin, why don’t we call it Tzigane?" Of course, Tzigane by Patricia Kopatchinskaja, who has been playing and dancing this music since her childhood in Moldova, does not sound like salon music... After a much-fêted recital at Wigmore Hall in 2017, the Financial Times wrote: " In another life, Patricia Kopatchinskaja might have been a rock star. This is a violinist who loves taking risks . . . But the final reward wasworth waiting for: a denouement of astonishing force."

Playing of such consummate ease combined with involvement and attention to detail...Simply, this is one of the finest, most musically sensitive recordings to have come my way for some time, and the neat title title ‘Deux’ exactly encapsulates the partnership on display. ... When the recording finished I listened to it all over again – it really is that good.

Brimming with personality, individuality and panache; in fact sometimes so much personality that a quick glance at the score is in order, simply to establish exactly what the ratio of Kopatchinskaja versus composer-in-question actually is...Every reading here works like a dream; no doubt in part because the three main works’ Hungarian folk roots are a perfect partner to her own Moldovan folk heritage.

A feast of edgy, risk-filled music-making...this is playing that looks around the corners of the music and is open to what’s coming next...Bartók’s 1922 Sonata No 2 bristles with energy but also glows with mercurially changing colour.

Kopatchinskaja is famous for digging into the strings of her instrument like an old-time prospector desperate for gold. She always finds it too, especially in a repertoire where her Middle European folk roots are a real asset. Hungarian and gypsy rhythms haunt Bartók’s mercurial Violin Sonata No 2, here dazzlingly varied in tone colours, although the music-making’s more striking still in Ravel’s Tzigane. This is dispatched with such furious pluckings, squeakings and slitherings that at the end her bow must have been nothing but wisps and tatters. Leschenko is equally fearsome, rippling through notes with dexterous speed.

Tzigane is off -the-scale exciting and improvisatory, Kop conjuring a scarcely unbelievable range of sounds in the opening solo with the freedom and timbral range of an experimental folk musician plus all the technique of a classical virtuoso.