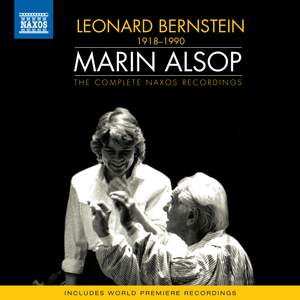 Here, in one convenient box, are all of Marin Alsop’s Bernstein recordings for Naxos–eight CDs worth–performances as fine as Bernstein’s own, and sometimes even better. This version of Mass,... — Classics Today More…

Bernstein: The Lark (2012 concert version with narrator by N.G. Lew and M. Alsop)

Mass: No. 7, Prayer for the Congregation. Almighty Father

Mass: No. 7, Prayer for the Congregation. Almighty Father

Mass: No. 31, Fraction. Things Get Broken

On the Waterfront Suite

On the Waterfront Suite

Mambo (From "West Side Story") [With Concert Ending]

Mambo (From "West Side Story") [With Concert Ending]

Excerpt,  Bernstein: Dance Episodes (3) from ‘On The Town'

Time Square Ballet (From "On the Town")

Time Square Ballet (From "On the Town")

For Lenny (Version for Piano & Orchestra)

For Lenny (Version for Piano & Orchestra)

Corigliano, J: For Lenny, with love - and candor…

For Lenny, with Love and Candor

For Lenny, with Love and Candor

Williams, John: To Lenny! To Lenny!

To Lenny! To Lenny!

To Lenny! To Lenny!

Schuman: Let's Hear It For Lenny!

Let's Hear It For Lenny!

Let's Hear It For Lenny!

I. For Helen Coates

VIII. For My Daughter, Nina

I. For Helen Coates

VIII. For My Daughter, Nina

Leonard Bernstein was without question the greatest musician America ever produced. As an inspirational teacher and renowned conductor he was the nation’s musical ambassador to the world, and his work as a composer bridged gaps and broke down barriers, reaching audiences way beyond the normal boundaries of classical music. This celebration of Bernstein’s centenary brings together all of the acclaimed Naxos recordings of his music conducted by his protégée Marin Alsop as well as new and world premiere recordings, and an insightful documentary DVD in which colleagues and family sum up this boundlessly brilliant and charismatic musical giant of the 20th century. Marin Alsop is an inspiring and powerful voice in the international music scene, a music director of vision and distinction who passionately believes that 'music has the power to change lives'. Alsop made history with her appointment as the 12th music director of the Baltimore Symphony Orchestra (BSO). Her success as the BSO’s music director has garnered national and international attention for her innovative programming and artistry. Alsop took up the post of principal conductor of the São Paulo Symphony Orchestra in 2012, and became music director in July 2013. Alsop is often making history: in 2005 she was the first conductor to be awarded a MacArthur Genius award, and in September 2013 as the first female conductor of the BBC’s Last Night of the Proms in London– an honour that she repeated in 2015.

Here, in one convenient box, are all of Marin Alsop’s Bernstein recordings for Naxos–eight CDs worth–performances as fine as Bernstein’s own, and sometimes even better. This version of Mass, which Alsop regards as Bernstein’s masterpiece, is the new reference version. Her accounts of the symphonies are fabulous, uniformly. Alsop chooses (mostly) the original version of Kaddish, and makes it work beautifully, despite all of the “talking” (as Bernstein put it). The choirs sing gloriously, with unusual clarity and intensity.

More importantly…the set includes Alsop's convincing account of the sprawling, uneven Mass, with Jubilant Sykes a charismatic Celebrant. There's not a dud performance here, and there's a genuinely entertaining bonus DVD: Georg Wübbolt’s Leonard Bernstein – Larger than Life includes interviews with the composer's children, plus contributions from Alsop and Sondheim. All good – treat yourself to an early Christmas present.

… Performed in readings of great style and panache – not to mention recorded with the greatest possible fidelity short of the surround sound medium. And what is particularly cherishable are not just the recordings of the major pieces, but the many unusual works (and several premieres); musts for completists.