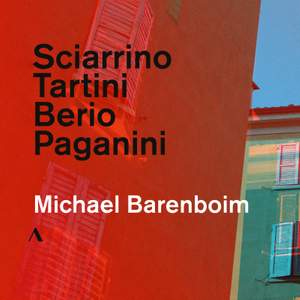 Sublimely controlled, Barenboim throws down the expressive gauntlet with playing as subtle as it is high-voltage and apparently – paradoxically – on the edge of reason. Underpinning the whole... — BBC Music Magazine, April 2018, 5 out of 5 stars More…

No. 17 in E-Flat Major. Sostenuto andante

No. 9 in E Major. Allegretto

No. 24 in A Minor. Tema con variazioni - Quasi presto

The violinist talks to Katherine about his new album of works by Sciarrino, Tartini, Berio & Paganini.

After his debut solo album with music by Bach, Bartók and Boulez, Michael Barenboim’s second album is also dedicated to works for solo violin and features compositions by Salvatore Sciarrino, Giuseppe Tartini, Luciano Berio, and Niccolò Paganini, thereby sketching a short history of Italian solo violin literature. The four works seem very heterogenous at first glance but what unites them is their rich technical and stylistic spectrum. The juxtaposition of traditional and contemporary music works creates an inimitable sound cosmos and makes the works by Tartini and Paganini sound incredibly modern alongside 20th-century music. Michael Barenboim creatively navigates the sometimes obsessive and diabolical elements of the works and creates an inspired and unique interpretation.

Sublimely controlled, Barenboim throws down the expressive gauntlet with playing as subtle as it is high-voltage and apparently – paradoxically – on the edge of reason. Underpinning the whole is an astonishing rendition of Tartini’s Devil’s Trill Sonata in which Barenboim eschews keyboard accompaniment…In short, this is visionary programming, breathtakingly realised.

A second beautiful disc from Barenboim, played with daring and warmth. The all-Italian music explores virtuosity in order to look beyond the notes.

This recording is breathtakingly compelling, and one that’s full of brilliant revelations, all captured in an appropriately full but focused acoustic.