Michael Barenboim’s first solo album (released last January on Accentus) quickly established him as an astute and adventurous programmer as well as a superbly eloquent violinist: juxtaposing works by Bach, Bartók and Boulez, the recording was roundly praised for playing described as ‘ripe-toned, meticulous, spontaneous and concentrated’ (Sunday Times), ‘persuasive, compelling and strikingly authoritative’ (The Strad) and ‘spilling over with life and drama’ (Gramophone). This month sees the release of a second volume of works for solo violin, this time with the focus on Italian composers: Tartini, Paganini, Berio and Sciarrino.

I spoke to Michael recently about the affinities between the four composers, the contrasts and connections between this recording and his debut disc, and how the conception of virtuosity evolved over the course of the three centuries charted on the album…

These are four composers which we wouldn't necessarily expect to see together on one album – could you tell me a little about what connects them for you?

If you were to see them regularly on one CD, I probably wouldn't have made this recording! The whole point was to bring out connections which aren't immediately obvious, and in this case those connections are partially because they come from the same country: across the centuries, there is something hard to define that's very specific to Italian music, and to Italian violin music in particular. Of course if you listen to Sciarrino alongside Tartini, then the first thing you hear is difference - but if you get to know it a little better you also hear similarities, and for me that's what makes this a special project.

One connection which struck me was the idea of the demonic, which preoccupies Tartini and Paganini – does that play out in the later works too?

There's a lot of mythology around that (all of it exaggerated!), but the type of virtuosity that you hear in Italian violin music is not this 'I am completely in control' type of mastery – you shouldn't get the feeling that the player is completely serene and experiences no difficulty. This music is all about extremities of emotion and feeling. Everything is extreme: the joy, and also the darkness. Nothing is moderate, and that's true of all four works. The Berio is a prime example of this: there isn't anything in that piece that is in any way moderate; it's all either extremely agitated and intense and fiery, or extremely calm, almost narcotic. And this is what links all four of them: this desire to explore the outer limits of all human emotions.

And is there is a sense of all four composers trying to push the limits of what the violin can do?

When you write a piece for solo violin (or indeed for any solo instrument) it's always a process of exploration, because that's all the resources you have. When you write for orchestra or for string quartet, you see each instrument in relation to the others, whereas here you have a process of discovery of the instrument's capabilities – and all four composers discover that this single instrument is capable of doing a surprising number of things! When Paganini wrote his Caprices, they were seen as the maximum: here was everything you could do on the violin. Then Sciarrino comes along and says 'Well that's not all you can do on the violin!', and I thought that was so interesting. That was one of the main reasons I put the four of them together.

You worked directly with Boulez, I think, when you were preparing your previous album of Bach, Bartók and his own music – did you get a similar opportunity with Sciarrino?

I had a completely different relationship with Boulez than I've had with literally anyone else. I don't really know Sciarrino so well: I met him and I spoke with him a couple of times, but that was really it. It's also not the kind of music that you play for [the composer] and they can say 'This is much too fast, too slow, too soft, too loud' – but I find it's worth simply getting to know what kind of a person someone is (and of course that's a luxury I don't have with Paganini or Tartini!). It doesn't necessarily mean you understand the score itself any better, but it did give me a little bit of insight into what kind of character would compose music like this; I don't know if it really helped in practical terms, but it was certainly an interesting process just to speak to him! It's not often that you have a composer who creates a completely new sound-world: he's one of the very few that can claim to have done that.

How did you first get a handle on his musical language?

I really got to know his music via the chamber pieces – I was aware of the Caprices, as you are if you're even mildly interested in contemporary music and you play the violin, so after I got hold of the sheet-music for them I just kept an ear out for what else there was in terms of chamber music to help me get some ideas together about the Caprices. The operas I didn't really have much chance to get to know in great detail, but with the chamber music I had a little more contact.

The older two composers on this album were violinists and the later two not – do you sense that at all in the writing?

It's funny, because if you look at Sciarrino and what he writes in the Caprices it's actually some of the most violinistic writing that you will ever find! He knows everything about everything on the violin - you can tell from the very first phrases. Of course some of the sounds are not clear pitches, and a lot of the effects that he asks for are not traditional 'violin sounds', but you can tell by all the means that he uses that he knows exactly how it all works – he knows that the violinist will play this phrase in first position, this in third position, so this will sound like this...it's quite extraordinary to think that he's not a violinist. And the same is true of the Berio: when these people write for an instrument, they go through an intense phase of really studying what that instrument can do: what is possible, what is not possible, what sounds good, what doesn't sound good.

It's interesting to compare this with the earlier album I recorded, where you had Boulez, Bach and Bartók: Bach was also a violinist, he could play these pieces, but the writing is completely different. It's almost as if he's writing for the violin, but on the other hand trying to extract the essence of the music directly, whereas with Tartini and Paganini and Sciarrino the instrument is really central to their thinking. Even with Boulez, who knew the violin inside-out, it's a totally different approach. The two programmes have the same thinking behind them, linking music which people might not necessarily automatically link, but the two kinds of music could not be more different! Linking Bach and Tartini is as alien as linking Bartók and Sciarrino – these people have nothing to do with each other, they're completely diametrically opposed.

Do you have plans for further projects on similar lines - perhaps something involving the solo sonatas of Ysaÿe...?

For the moment I'm just quite happy to have done this! And at the moment I'm playing the programme a lot in concert – not exactly touring, but certainly performing it with some regularity. But there are many more ways to discover the solo violin repertoire... 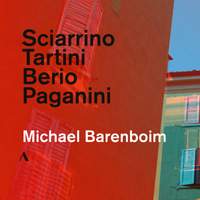 'A second beautiful disc from Barenboim, played with daring and warmth. The all-Italian music explores virtuosity in order to look beyond the notes.' (Sunday Times) 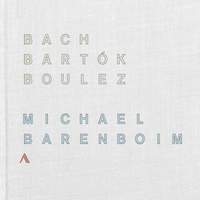 'Barenboim makes it all sound easy, though, with performances spilling over with life and drama. Every work's soul has been ignited and revealed, every second telling a story, all unmarred by a single glitch in intonation or articulation.' (Gramophone)