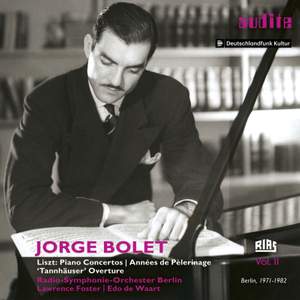 Bolet was one of the finest of all Liszt players… One’s spirits lift even before the ‘play’ button is pressed…The Wagner-Liszt Tannhäuser Overture was one of Bolet’s specialities. This astonishing... — Gramophone Magazine, April 2018 More…

Volume 2 of the RIAS Jorge Bolet recordings is dedicated to Franz Liszt, whose works helped launch the Cuban-born pianist's career; it was also his Liszt performances that shaped Bolet's later path. JorgeBolet shot to fame with the soundtrack of the Hollywood adaptation of the Liszt biography Song Without End. The RIAS recordings also show Bolet to be a Liszt authority. The piano concertos, conducted by LawrenceFoster and Edo de Waart, are concert recordings: the solo pieces were recorded in the studio. The concert paraphrase of the overture to Wagner's Tannhäuser, whose challenges are feared by most pianists, was one of Bolet's "war horses": few other twentieth century pianists would have come close to the technical and interpretational perfection with which he performed the work. The recording of the three Petrarch sonnets from the second volume of Liszt's Années de Pèlerinage reveal Bolet to be a master of beautiful sound production and legato playing.

Bolet demonstrates an unerringly clear and perfectly shaped pianism, as well as his understanding of virtuosity: it is never employed for its own sake, but always to illustrate the musical context. In contrast to the recordings in our first boxed set (AUDITE21438), all recordings presented here are in stereo.

Bolet was one of the finest of all Liszt players… One’s spirits lift even before the ‘play’ button is pressed…The Wagner-Liszt Tannhäuser Overture was one of Bolet’s specialities. This astonishing studio recording…was made in October 1973. The command of structure, the judicious pacing and unleashing of those final torrential octaves under the main theme send shivers up the spine.