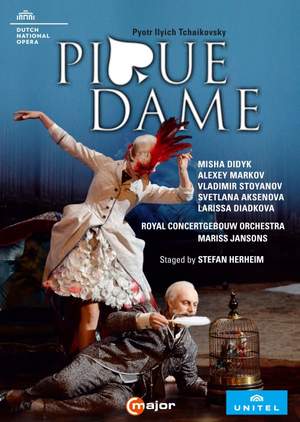 It’s certainly wacky. But it’s followed through with rigorous brilliance…musically all is superb; this is the equal of Mariss Jansons’s first-rate Bavarian CD recording, with some of the same... — BBC Music Magazine, May 2018, 5 out of 5 stars More…

Former Music Director Mariss Jansons returns to Amsterdam to conduct Pique Dame at the Dutch National Opera with ‘his’ Royal Concertgebouw Orchestra. He encounters a noteworthy cast and under his baton the orchestra sounds ‘brilliant and splendid’ (Der Tagesspiegel). Renowned director Stefan Herheim staged Tchaikovsky’s much-loved opera about a young man who, for the prospect of earthly wealth, gambles away his chance for love and happiness. Herheim, whose stagings are famous for their multi-layered levels of interpretation, attempts to reflect on the composer’s contested sexuality. ‘The Latvian maestro, the intriguingly performing orchestra, the smartly-chosen soloists, and director Stefan Herheim have succeeded in staging an extraordinary production’ (Die Presse). ‘Stefan Herheim makes a great picture show out of Tchaikovsky’s ‘Pique Dame’’ (NMZ). ‘A masterpiece’ (Der Standard).

It’s certainly wacky. But it’s followed through with rigorous brilliance…musically all is superb; this is the equal of Mariss Jansons’s first-rate Bavarian CD recording, with some of the same cast including Misha Didyk, currently the Hermann of choice. The Concertgebouw relishes the dark hues and the amazing woodwind scoring; the chorus, well-marshalled with the men as multiple Tchaikovskys, is superb.

I adored this staging when I saw it in Amsterdam and love it no less on revisiting it via Blu-ray. Superimposing the composer’s biography on to arguably his greatest opera works ingeniously...Musically, standards are extremely high, led by Mariss Jansons’s inspired presence in the pit...Aksenova sings a steely Lisa...Diadkova is remarkable as the Countess – singing rather than growling her role.

Mariss Jansons adopts some extreme tempos - notably in a decidely speedy central love duet - but they all work, and many of them revelatory. The Concertgebouw Orchestra plays with unfailing sensitivity and the choral singing is as precise as it is powerful. The video director does an effective job of capturing a huge amount of stage activity, and the sound is excellent.

Jansons conducts with clarity and passion, the orchestra and chorus are excellent and the cast is strong.