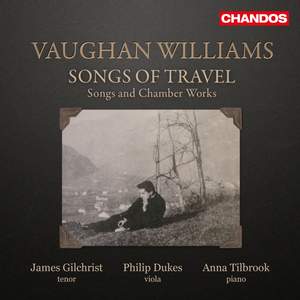 His sound is certainly mellifluous, his phrasing poised yet fluent, but the overall interpretation is uneven…Gilchrist deliver ‘Let Beauty Awake’ very beautifully, and the other more lyrical... — BBC Music Magazine, March 2018, 4 out of 5 stars More…

No. 3, The Roadside Fire

No. 6, The Infinite Shining Heavens

No. 8, Bright Is the Ring of Words

No. 9, I Have Trod the Upward and the Downward Slope

Vaughan Williams: The Sky above the Roof

Vaughan Williams: Orpheus With His Lute

The House of Life: No. 2, Silent Noon

Having previously recorded British repertoire on Chandos, James Gilchrist joins the pianist Anna Tilbrook nine years after their previous recording, in a lyrical journey through some of Vaughan Williams’s best songs and rarely heard chamber works. They are joined by Philip Dukes, ‘Great Britain’s most outstanding viola player’, according to The Times. This album captures the composer’s love for both the voice and the viola, bringing together five works for tenor and piano, two for tenor, viola, and piano, and two works for viola and piano alone. Central to the recording is the fresh, invigorating, and at times reflective cycle ‘Songs of Travel,’ composed between 1901 and 1904, of special interest is also an arrangement of ‘Rhosymedre’ by the chief music critic of The Times, Richard Morrison, recorded here for the first time and performed by the same forces who gave the premiere of the arrangement in St. John’s Smith Square in 2016 to critical acclaim.

His sound is certainly mellifluous, his phrasing poised yet fluent, but the overall interpretation is uneven…Gilchrist deliver ‘Let Beauty Awake’ very beautifully, and the other more lyrical songs, but he doesn’t seem to vary his tone enough for the darker Scottish-tinged lament ‘Whither Must I Wander?’

Gilchrist and Tilbrook draw upon the reserves of experience that come with two decades of performing together to lend delectably wise advocacy to the Songs of Travel…This is a strongly recommendable issue.

Convincing and engrossing performances of VW on the viola.