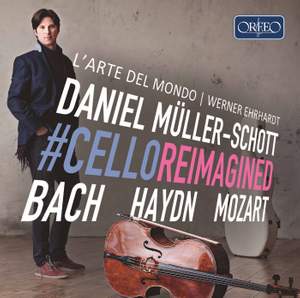 On his new recording Daniel Müller-Schott demonstrates a verve and lively curiosity in his programme, bringing together three composers to form a triangular relationship that is fascinating to experience. The intertwining and superimposition of successive generations is charming in itself: Johann Sebastian Bach’s son, born in 1714, was perhaps the greatest composer of his generation; the essential founding father of the Classical era and creator of significant musical genres, born in 1732; and finally, the child prodigy born in 1756. The dates of their deaths, however, then seem to skew the chronology: Mozart died in 1791, just three years after Carl Philipp Emanuel, whereas Joseph Haydn lived another 18 years. CPE Bach made a significant contribution to establishing the piano concerto genre and arranged three such works for flute and – all of them predictably virtuosic – for the cello, one of which can be heard on this recording. Haydn on the other hand wrote, as is well known, the first and sadly the only great 'Viennese Classical' cello concerto, which Daniel Müller-Schott naturally plays often. He also composed piano and violin concertos, one of which appears here in a technically demanding arrangement for cello.Daniel Müller-Schott, in the tradition of Emanuel Feuermann, has attempted to imagine what Mozart’s Oboe Concerto would sound like on the cello. In the process, he demonstrates the typical way in which Mozart transcended the borders of genre for solo concerto. The experimental repertoire succeeds in this instance not least thanks to the lively, infectious musicality of the L’Arte del mondo ensemble under the direction of Werner Ehrhardt, who are clearly very much at home in this music.