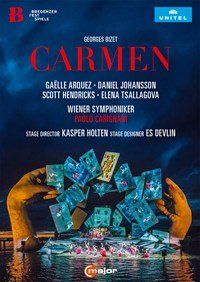 Holten says he’s keen to steer clear of the Spanish clichés on the one hand, and to examine Carmen as a real person on the other…It’s no earth-shattering insight but it does form the basis for... — Gramophone Magazine, February 2018 More… 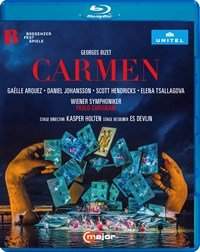 Georges Bizet‘s captivating music with its Spanish sounds took the world by storm: Carmen‘s Habanera and Seguidilla, like Escamillo‘s Toreador‘s Song, are known to one and all. The French composer‘s most successful opera is staged on the world’s largest, spectacular floating stage of Lake Constance in Bregenz, with a set designed by British artist Es Devlin. She has designed sets for pop stars like Adele, U2, Take That, the Pet Shop Boys and Kanye West. In collaboration with the stage director Kasper Holten, Director of Opera at the Royal Opera House in London, she has also worked at opera houses in Helsinki and Copenhagen, at the Theater an der Wien and the Royal Opera House Covent Garden. For the Danish stage director, this ‘opera about destiny and obsession’ centres on ‘two people who are treated as outsiders, whose paths cross and who cling to each other in a passionate but unhealthy relationship’.

Holten says he’s keen to steer clear of the Spanish clichés on the one hand, and to examine Carmen as a real person on the other…It’s no earth-shattering insight but it does form the basis for a central performance from Gäelle Arquez that is unusually three-dimensional, occasionally communicating a touching remorse and reflection. It helps, too, that the French mezzo is a striking, captivating performer, wrapping all and sundry round her little finger.

With microphones both visible and impacting on the sound quality, this is, not perhaps a Carmen to be savoured for its own sake so much as a souvenir of a lively and intelligently thought-through modern-dress production; there's plenty of dancing (choreographed by Signe Fabricius), some of it undertaken in the water, where the protagonist eventually meets her fate. Paolo Carignani's conducting is vital and energising, the chorus disciplined and the orchestra of high quality.

Carmen from Bregenz (2017) is effective. It has three main advantages. Firstly, Es Devlin’s spectacular set – a pair of massive hands that rise from the lake to embrace the stage, throwing giant cards that tumble and spin over the action, and which double as screens to enlarge the stage action. Secondly, Paolo Carignani’s conducting, which combines pace with detail (plus the dialogue is largely shorn). Lastly, Gaëlle Arquez’s knockout Carmen: sexy, charismatic and beautifully sung.