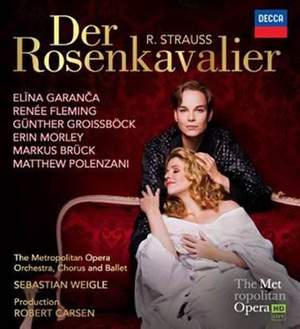 Carsen reminds us that this is Vienna waltzing on the edge of a volcano…There’s no denying the care with which [Fleming] sings the role, even if she never quite manages to act from within…[Garanča]... — BBC Music Magazine, March 2018, More… 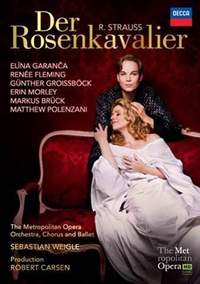 This is Renée Fleming’s last ever performance of the Marschallin, one of her signature roles, as performed at the Metropolitan Opera following a run at London’s Royal Opera House earlier this year.

This new and notable production sees Robert Carsen update the setting to Vienna in 1911, the year of the opera’s premiere.

“The dramatic chemistry between Ms. Fleming and Ms. Garanča came through in their every exchange” New York Times

Carsen reminds us that this is Vienna waltzing on the edge of a volcano…There’s no denying the care with which [Fleming] sings the role, even if she never quite manages to act from within…[Garanča] is a mercurial Octavian, a fully realised character and in fine voice…but the acting and singing honours really belong to Günter Groissböck’s Ochs. Younger than usual, he’s less a boor than a life force bursting through the gentility of Old Vienna.

Fleming has always been good at the modern psychological side of the Marschallin, clearly focused on the role’s dilemma of ageing; Garanča presents her character’s age, masculinity and boy/girl comedy with at least as much aplomb and sheer energy as any Octavian since Brigitte Fassbaender or Janet Baker…the performances are so refined, this DVD, a historic event, can be recommended in a crowded market.

Robert Carsen’s pre-first world war setting provides an apt and glamorous backdrop for the love, loss and mayhem looked down upon disapprovingly by ancestral portraits, a world soon to end in the onslaught of war. Fleming defies the years and is on best vocal behaviour. She oozes glamour, and has one eye on the past but one on the future: once she’s over her self- absorption she rallies and finally departs with the Police Commissioner. Her soprano still possesses the most alluring shimmer. Garanča is equally superlative, her tone rich and supple, her acting astonishingly good, the most convincing youth imaginable.