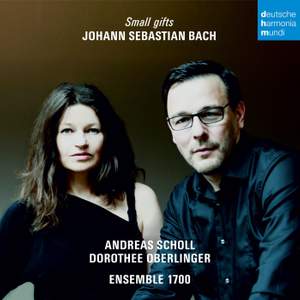 The acclaimed recorder player Dorothee Oberlinger and her ensemble 1700 team up with famous countertenor Andreas Scholl for this inspiring new album featuring the work of J.S. Bach.  The album includes arias from Bach cantatas for alto, a concerto for harpsichord arranged for flute, the cantata BWV 170 “Vergnügte Ruh” and the famed Brandenburg concertos No. 2 and No. 4. Dorothee Oberlinger is one of the most amazing discoveries of recent years, an expressive virtuoso who - quite rightly - received numerous awards while still very young. Today she is seen as one of the world’s greatest recorder-players, earning her unanimous acclaim for solo recitals at festivals all over Europe, in America and Japan, for example at the Ludwigsburger Schlossfestspiele, the Musikfestspiele Potsdam and the Settimane Musicale Stresa. Born in Germany, Andreas Scholl's early musical training was with the Kiedricher Chorbuben. He later studied under Richard Levitt and René Jacobs at the Schola Cantorum Basiliensis. A Grammy nominated artist, he has won numerous awards and prizes including the prestigious ECHO Award for his composition The Emperor's New Clothes and The Nightingale released on Deutsche Grammphon.

Scholl’s voice, with its bright directness and woody lower register, is a natural partner for Oberlinger’s solo recorders…There’s an edgier, more complicated quality to Scholl’s voice these days that lends itself better to minor-key arias with their human frailties and doubts…Sinkovsky’s many solo contributions to the disc are real attention-grabbers – period string-playing of the very finest order.

Andreas Scholl, voice fresh and unblemished as ever, and recorder player/director Dorothee Oberlinger are in their element...Oberlinger’s small, Cologne-based chamber ensemble plays with lithe precision, each musician a soloist. Quite large gifts, it turns out.