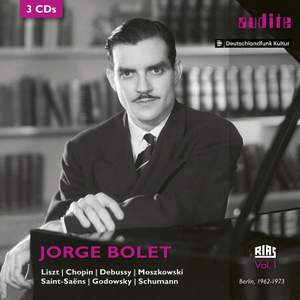 Almost everything by Bolet is worth acquiring, but this collection is particularly valuable, coming from the period just after he had finally attracted some attention for his Liszt-playing…Bolet... — Gramophone Magazine, December 2017 More…

No. 6, Vallee d'Obermann (Valley of Obermann)

Cuban-American pianist Jorge Bolet (1914-1990), misleadingly labeled the “last Romantic” among 20th century pianists and marketed under this title when he achieved world fame at the end of his career, was first and foremost a gentleman of the piano.

Few pianists interpreted the great piano music of the 19th and early 20th centuries with such unerring stylistic assurance and technical mastery that was at the same time completely free of vanity and striving for effect. Rather than vague sentimentality, Bolet – who studied at the world renowned Curtis Institute of Music in Philadelphia with David Saperton, son-in-law of the legendary pianist Leopold Godowsky, and later succeeded Rudolf Serkin as director of its piano department – sought a balance between musical and pianistic intelligence. Thanks to these qualities, his recordings, which include not-uncontroversial transcriptions from the golden age of piano playing before 1914, are considered benchmarks. These recordings for the RIAS Berlin from 1962–73, featuring works by Chopin, Liszt, and Debussy along with highly virtuosic encores and arrangements by Moritz Moszkowski and Godowsky (among others), are no exception: here we experience a pianist and musician who rightly occupies a place among the pantheon of great pianists.

Almost everything by Bolet is worth acquiring, but this collection is particularly valuable, coming from the period just after he had finally attracted some attention for his Liszt-playing…Bolet was at his best in front an audience and, as with the Années de pelerinage, though there is none, there’s a ‘live broadcast’ feel to the playing.

these performances are of a breathtaking aristocratic strength, grace and fluency. Indeed it is tempting to say that no piano playing of more sheer beauty exists on record. Principally devoted to Chopin and Liszt – cornerstones of Bolet’s repertoire – the playing is of a pianistic command and poetic instinct given to very few. The recorded sound is admirable, the presentation lavish – all of which makes the wait for Volume 2 agonising!