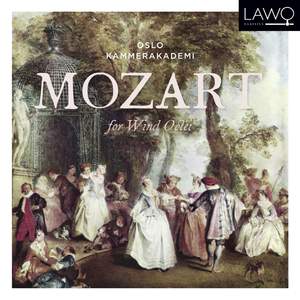 Mozart was certainly in trouble after June 8, 1781, after having received the oft cited “kick in the backside” by the Archbishop of Salzburg, who had completely lost his patience with the composer. Out of work in his own hometown, he decided to try his luck in Vienna. In a musical metropolis like Vienna, there weren’t necessarily any openings for composers who fell in disrepute with their masters. It was now of the utmost importance to come up with a stunningly brilliant idea! He began composing The Abduction from the Seraglio, but according to a letter he wrote to his father Leopold, the work was constantly delayed due to changes to the libretto and trouble with the production itself. In the same letter, he added that he would gladly accept other composition tasks in the meantime.

Therese Hinckel was the niece of the court painter. On the occasion of her name day, October 15, 1781, a celebration was to be held. Mozart was commissioned to compose Nachtmusik (serenade) for the occasion. The work was orchestrated for two clarinets, two horns, and two bassoons. That evening the six winds performed the serenade twice! Mozart wrote to his father that this was particularly demanding for the hornists. Nevertheless, the same sextet surprised Mozart on the morning of his name day, October 31, with another performance of the serenade.

Mozart had previously composed a whole series of divertimenti for six winds, but they were for two oboes, two horns, and two bassoons. In Vienna, however, the clarinet had made its debut and Harmoniemusik without this very popular innovation would have been an unwise choice for such a young and promising composer! The term Harmoniemusik is of a somewhat unclear origin, but it is usually attributed to a chamber ensemble consisting of wind players from a Viennese classical era orchestra, and it was precisely at this time that the clarinet found its place in the orchestras of Vienna. As mentioned, Vienna was undoubtedly the world’s leading musical center, so this novelty rapidly spread to other cities!

Harmoniemusik was on its way to becoming a huge trend! Several of the leading courts in Central Europe eventually formed such ensembles. In Vienna, the Prince of Liechtenstein had his own Harmoniemusik, which eventually was led by the legendary oboist Triebensee. At Hofburg in Vienna, even the emperor, who already had several musicians employed in the opera and military orchestras, wanted his own Harmonie ensemble, and in April 1782, the Kaiserliche Harmonie- und Tafelmusik saw the light of day. The name of this group says a lot about its function. This flexible ensemble was supposed to play for feasts and banquets, at outdoor events, and in more intimate settings. The ensemble, consisting of two oboes, two clarinets, two horns, two bassoons, and a sixteen-foot bass instrument (double bass or contrabassoon to double second bassoon), made art music even more accessible than before. In a way, Harmoniemusik was a kind of classical portable stereo system!

Everything suggests that Mozart embraced these new possibilities. He wrote to his father that he would arrange a Harmoniemusik version of The Abduction. He added that he would do this “before someone else does!” (Unfortunately, this manuscript is not preserved.) He reworked the sextet (KV 375), written just a few months earlier, to include two oboes so that it could fit in the midst of the emperor’s newly formed ensemble, and he composed the Serenade in C minor, KV 388. Mozart did a thorough job! KV 375 is in E-flat major and is rather easygoing. It was originally intended for a garden party on the occasion of a young lady’s name day. C minor on the other hand, is a key that, during this time period, was considered much deeper. These two keys represented the polar extremes of music’s emotional register. It’s not an unreasonable assertion that Mozart wrote outstandingly well for winds, probably better than anyone before him, and also better than most succeeding him! He had his own special ability to bring out the essence of each instrument for which he wrote. One would say idiomatic in music history terms, while wind players themselves would say it just lies well on the instrument, though challenging and virtuosic. In the end, Mozart was able to show both the emperor and the world just what he was good for as a composer, even though he had just been fired in Salzburg!

Joseph Triebensee (1772-1846) was another main character in the history of Harmoniemusik. He was an oboist born in Wittingau, Bohemia and had learned to play from his father Georg. His father must have been a very good oboist, as he played first oboe in the orchestra for the performances of The Abduction, Figaro, and Cosi fan tutte, all of which have a number of exposed solo parts. Joseph also developed into one of the leading oboists of the time, and managed to perform The Magic Flute as the second oboist in 1791, at only 19 years old! Already in 1794 he became the first oboist and music director (Kapellmeister) for the Prince of Liechtenstein, who maintained a highly recognized Harmonie ensemble. (The Princes of Liechtenstein resided alternately in Vienna and Feldsberg.) During this period he composed 45 works for Harmonie ensemble, and he arranged music from almost 80 operas for this same setting! In fact, his list of opera arrangements represents, in essence, a diary of opera performances in Vienna. Joseph Triebensee was not the only one who continuously adapted the latest music written for the Harmonie setting. Mozart’s statement that he would arrange The Abduction for that orchestration “before anyone else does it” was indeed no joke! Harmoniemusik was definitely popular, and there was good money to be made!

Triebensee succeeded Carl Maria von Weber himself as the director of the Prague Opera in 1816. Triebensee’s arrangement of La Clemenza di Tito is quite typical of the genre. Keys are often adapted to the wind instruments, so that they can easily play the string voices. The arias are often shared amongst the different wind soloists. Naturally, Triebensee gave himself the most famous clarinet solo in the first oboe part. The hornists largely take care of the trumpet voices of the orchestra version. Historically, it would be almost unthinkable to imagine an orchestra with trumpets but without kettledrums. Oslo Kammerakademi therefore takes the liberty of adding kettledrums to this version of the opera. All in all, this suite is entertaining, viruosic, and varied chamber music, not to mention that it was made more accessible to a wider audience as it could be performed both outdoors and indoors, in public and private contexts. Only nine musicians were required!