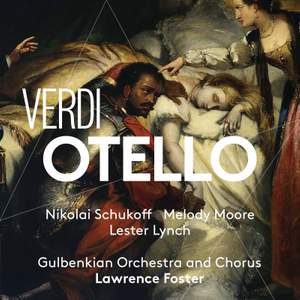 All three of the principals deliver honourable, quality performances…Schukoff is a convincing exponent of the title-role, deliberate and controlled, if in the final analysis somewhat bland and... — BBC Music Magazine, April 2018, 3 out of 5 stars More…

The opera Otello by Giuseppe Verdi and Arrigo Boito not only represents the outstanding result of an intensely fruitful creative collaboration between composer and librettist, but also one of the most important core works ever in the opera repertoire. An outstandingly crafted literary foundation and a dramatic story, in which three extremely different people - with characters ranging from profoundly evil, madly jealous and distrustful, to enamoured of death - take an emotional roller-coaster ride. A ride ending in death for all three. This drama is supported by music that, despite its magic of its refined tones, never brushes aside the greatest priority of the Italian opera: the human voice. In Otello, Verdi succeeded in creating his own path leading to "music-drama as a 'Gesamtkunstwerk,' as a perfect synthesis between action and music." Leading the prestigious Gulbenkian Orchestra in this ambitious studio recording is the knowledgeable and experienced conductor Lawrence Foster, who has previously made impressive recordings of other operas for PENTATONE: a highly praised recording of Strauss's Zigeunerbaron (= gipsy baron) and Getty's Usher House.

The singers of the three main roles - Otello, lago, and Desdemona - already met for the complete recording of Getty's The Little Match Girl for PENTATONE, dating from 2014.

Melody Moore, Nikolai Schukoff, and Lester Lynch are now recording these roles for the first time. First and foremost, Melody Moore, who is one of the most promising American singers of her generation. In her first recording of an Italian opera for PENTATONE, she demonstrates that her truly youthful dramatic soprano voice is able to flawlessly continue the pure Italian tradition of a Renata Tebaldi. The Austrian tenor Nikolai Schukoff once again widens his professional range, singing the demanding title role of Otello with ardent intensity - for the first time, by the way, in the production at hand. As his abysmally evil opponent, the American baritone Lester Lynch matches him in vocal intensity.

All three of the principals deliver honourable, quality performances…Schukoff is a convincing exponent of the title-role, deliberate and controlled, if in the final analysis somewhat bland and lacking in dramatic stature…Moore knows how to shape Desdemona’s lines and her account blends passion and containment…One of the set’s undoubted assets is its superior recording quality, notable for bright forward sound, sharp definition and a wide range.

[Schukoff and Moore] may be unfamiliar but greatness is surely around the corner, for among modern interpretations of Otello these must rank among the best. Melody Moore is a warm, womanly Desdemona…The baritonal quality of [Schukoff’s] voice is ideally suited to the role and he shapes the music sensitively…The Gulbenkian Orchestra and Chorus are splendid…This is a notable achievement.