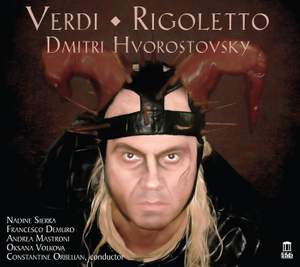 This recording, made in July 2016, shows [Hvorostovsky] at the height of his powers in the title role, revealing the full range of Rigoletto’s qualities…with all the intensity Verdi required…The... — BBC Music Magazine, March 2018, 4 out of 5 stars More…

Giuseppe Verdi may have written his most glamorous and heroic roles for tenors, but he often assigned his more psychologically complex and conflicted character portrayals to baritones and Rigoletto is just such a role: perhaps the greatest baritone role ever written. It demands not only a magnificent voice, but also a supremely gifted actor who is able to convey a broad range of emotions, human qualities, and inner subtleties. Enter universally beloved Dmitri Hvorostovsky: a prolific Delos artist and supreme Verdi baritone. The resplendent beauty and incomparable versatility of his voice is matched only by the depth of his interpretive soul. In this Dmitris first-ever (and long-awaited) complete recording of Rigolettohe performs the title role magnificently, along with an all-star supporting cast. Choral-orchestral splendor comes courtesy of renowned maestro Constantine Orbelian, his Kaunas City Symphony Orchestra, and the men of the Kaunas State Choir.

This recording, made in July 2016, shows [Hvorostovsky] at the height of his powers in the title role, revealing the full range of Rigoletto’s qualities…with all the intensity Verdi required…The conducting and the orchestra are not in the first rank, but the studio performance has the kind of authenticity which glossier accounts often lack…There will no doubt be more tributes to Hvorostovsky’s star qualities, but they are unlikely to surpass this one

All [Hvorostovsky’s] artistry and intelligence is still there…though you’re conscious of his effortful snatching for breath…Demuro is a breezy Duke of Mantua, a slight sob to his sound, but never forcing his tenor too hard.

[Hvorostovsky] His tone strong and vigorous, with the odd momentary suggestion of effort not unsuited to his part; his interpretation remains a formidable achievement, consistently exploring and using the text to define the jester's character. The recording possesses a good sense of perspective, embodying orchestral sound that is rich in colouring, though there are a few moments in the busy opening scene when ensemble is not as tight as it should be.

Last year, while battling brain cancer, the baritone Dmitri Hvorostovsky spent nine days recording “Rigoletto,” which was released this November, shortly before his death at 55. He gives a russet-toned, compelling performance, joined by an impressive cast for a gripping and, in every sense, poignant performance.

This new recording of Verdi’s Rigoletto stars the late, great Dmitri Hvorostovsky in one of his signature roles. He is very fine indeed, and grows the character interestingly, less sarcastic and more brutal than some – this Rigoletto can give as good as he gets. His baritone is secure and colourful. Likewise Francesco Demuro’s Duke, with lithe tone, crisp enunciation and truly Italianate ping to the voice, a pleasure to hear. Orbelian’s conducting follows a classic path; the supporting cast is adept if not exciting.