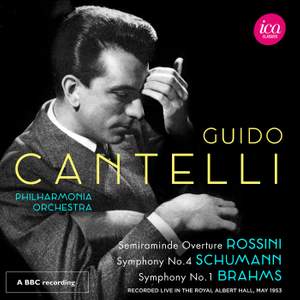 In contrast with lithe, clean recordings by modern maestros, this Brahms First Symphony comes with dirt under the fingernails and an undeniable halo of majesty. From the apocalyptic opening timpani,... — BBC Music Magazine, February 2018, 4 out of 5 stars More…

Guido Cantelli's live recordings with the Philharmonia Orchestra are exceptionally rare because the BBC seldom broadcast any of his concerts. ICA Classics released Cantellis live concert from the Edinburgh Festival in September 1954 on ICAC 5081 but there has been nothing else. Toscanini was Cantellis mentor and there is no doubt that he would have continued in the great conductors footsteps had he not been tragically killed in an air accident in Paris on the 24th November 1956. He was 36 years old. The Royal Albert Hall recording made by Richard Itter in May 1953 is very well recorded for the period and preserves the palpable excitement of the whole concert.

In contrast with lithe, clean recordings by modern maestros, this Brahms First Symphony comes with dirt under the fingernails and an undeniable halo of majesty. From the apocalyptic opening timpani, there’s a real sense of occasion and mystery that no amount of interference can mask…Cantelli also gives us something all too often missing from today’s urbane, athletic readings: passion.

The Rossini is graced with some exceptional playing from the Philharmonia winds and brass...Of the various Schumann Fourths we have from Cantelli, this is in some respects the most impressive...the excellent balance allows us to appreciate some sensitive dovetailing and interconnecting detail that helps make the performance so cogent and memorable.

The performance is highly presentable.

A Christmas solution for historic recordings fans, but any music lover should be pleased: a rare live recording of a complete Philharmonia Orchestra concert at the Royal Albert Hall...Once your ears adjust, these performances of Rossini, Schumann and Brahms have engrossing flair and fizzing energy.