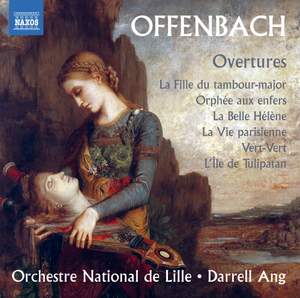 A serviceable selection of these hugely enjoyable overtures given energetic if not particularly nuanced performances. — MusicWeb International, January 2018

Offenbach: Overture to a Grand Orchestra

Jacques Offenbach is best remembered for his operettas, but the dramatic Ouverture a grand orchestra is a rarely heard early piece that presages his future in musical theatre. The enduring popularity of Orpheus in the Underworld is due in no small part to the Can-Can, now one of the most iconic pieces in Western classical music. Orpheus was Offenbach’s first full-length operetta, and The Drum-Major’s Daughter was to be his last, those in between including the popular vaudeville of Monsieur et Madame Denis, humorous satires on Parisian life, and La Belle Helene, an instant success that enjoyed an initial run of 700 performances.

A serviceable selection of these hugely enjoyable overtures given energetic if not particularly nuanced performances.