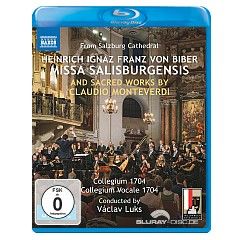 other sacred works by Monteverdi

Polychoral music is so synonymous with 16th century Venice that it is easy to forget that the longest flourishing of this style- possibly even its invention- took place in Germany. Whether or not it was in Munich with the works of Orlande de Lassus that the Gabrielis first encountered its effects, polychoral music came to define German textures and techniques for over a century. Both apprentices and rivals to their Italian counterparts, composers such as Hieronymus Praetorius, Schutz, Hassler and Scheidt, as well as Austria’s Biber, fostered a tradition whose influence would extend all the way to the motets of Bach. This performance places a giant of Baroque choral music, Biber’s Missa Salisburgensis, alongside the Venetian choral works of Monteverdi from which it takes its inspiration. The combination is a heady one, a triumphal musical celebration uniquely appropriate to mark the 200th anniversary year of Salzburg’s affiliation with Austria.