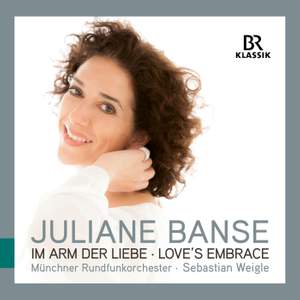 This programme brings together some of the most seductive songs of Joseph Marx…Banse is never less than convincing on her own terms…Weigle and the Munich Radio Orchestra offer warm, sensitive... — Gramophone Magazine, February 2018 More…

Juliane Banse's current concept album, entitled "Love’s Embrace”, is devoted to orchestral Lieder of the early twentieth century and presents works and composers who have been very unjustly forgotten. The romantic lyrics have catchy melodies and lightweight orchestration; they are easily on a par with the well-known orchestral Lieder by Mahler or Strauss. An excellent opportunity to regain familiarity with Late Romantic orchestral Lieder by Hans Pfitzner, Joseph Marx, Walter Braunfels and Erich Wolfgang Korngold, and to experience them in exemplary interpretations. Towards the end of the nineteenth century, the Golden Age of the orchestral piano Lied and the original orchestral Lied had begun - with Hugo Wolf and, above all, Gustav Mahler. “Away with the piano!" was the latter's fierce demand: "We moderns need a larger device to express our thoughts, whether great or small.” Richard Strauss, Hans Pfitzner, Erich Wolfgang Korngold and Max Reger thought and composed in very much the same manner as such now-forgotten and soon to be finally rediscovered masters as Joseph Marx or Walter Braunfels. Together with the Munich Rundfunkorchester conducted by Sebastian Weigle, Juliane Banse recorded the orchestral Lieder in a studio production by the Bayerische Rundfunk in March 2015.

This programme brings together some of the most seductive songs of Joseph Marx…Banse is never less than convincing on her own terms…Weigle and the Munich Radio Orchestra offer warm, sensitive accompaniment…An enjoyable programme, lovingly performed.