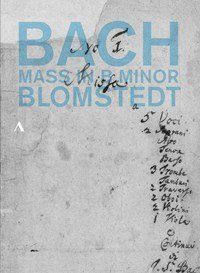 Blomstedt is never bent on point-scoring didacticism, His is a truthful account; prayerful, reverential, intent on welding the disparate movements into a caressing over-arching entity… Among... — BBC Music Magazine, February 2018, 4 out of 5 stars More…

Nothing else that he wrote is as all-encompassing as the Mass in B minor, not even the great Passions,” says Herbert Blomstedt about Johann Sebastian Bach’s “Opus summum”. The Dresdner Kammerchor and the Gewandhausorchester Leipzig under the musical direction of Herbert Blomstedt have merged ingeniously to conclude the Bachfest Leipzig with this unrivaled work – a work that bears close connections to choir and orchestra, as well as to Herbert Blomstedt himself. J. S. Bach Mass in B minor, BWV 232 Gewandhausorchester Leipzig. Performing this monumental work is the ever-capable Dresdner Kammerchor conducted by Herbert Blomstedt. Featured soloists include Christina Landshamer, soprano, Elisabeth Kulman, alto, Wolfram Lattke, tenor, and Luca Pisaroni, bass.

Blomstedt is never bent on point-scoring didacticism, His is a truthful account; prayerful, reverential, intent on welding the disparate movements into a caressing over-arching entity… Among the soloists Christina Landshamer and Elisabeth Kulman enthral.

Blomstedt lays a light, smooth plaster over the stylistic distinctions between each movement of the Missa proper…Best of the soloists is Elisabeth Kulman, whose refined breadth of line and lightly worn dignity raises her contributions to another level…With an Agnus Dei of simple, unforced beauty, Kulman sets the seal on an account of solid virtues but intermittent insights.