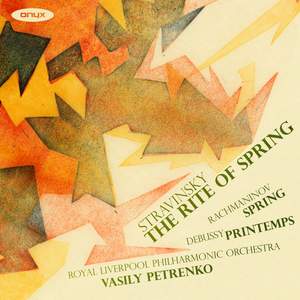 and works by Debussy and Rachmaninov

This is a searing account of the Rite. Petrenko judges the speeds acutely, always insistent, without simply trying to set landspeed records, and there’s a visceral energy to the RLPO’s playing,... — BBC Music Magazine, February 2018, More…

I. Adoration of the Earth

II. The Augurs of Spring - Dances of the Young Girls

V. Ritual of the Rival Tribes

VI. Procession of the Sage

VIII. Dance of the Earth

III .Glorification of the Chosen One

IV. Evocation of the Ancestors

V. Ritual Dance of the Ancestors

Three works inspired by Spring – Stravinsky’s iconic and revolutionary 1913 ballet The Rite of Spring depicts Russian pagan tribes celebrating the emergence of Spring with frenzied dances and ritual sacrifice. The music has a rhythmic complexity and violence that caused a riot to break out at its premier in Paris. Rachmaninov’s Spring Cantata tells the story of a husband who has struggled through the harsh Russian winter knowing his wife has been having an affair with a younger man. He swears he will kill them, but on seeing the wonder of spring all around him, relents and forgives them both. Debussy’s early ‘Printemps’ of 1885 was said to have been inspired by Botticelli’s ‘Primavera’. Debussy was staying at the Villa Medici in Rome when he wrote this colourful and joyous work.

This is a searing account of the Rite. Petrenko judges the speeds acutely, always insistent, without simply trying to set landspeed records, and there’s a visceral energy to the RLPO’s playing, the orchestra cultivating a rawness of sound.

The RLPO are in cracking shape under Petrenko’s baton, with playing that is both vibrant and urgent … This is a most enjoyable, entertaining disc.

One of the finest recordings of The Rite of Spring, as good as those of Doráti and Stravinsky himself. The Debussy is especially welcome – one of the most evocative Spring-like works ever written, in the right hands – and these are the right hands, as they are also for the other works.

The playing is outstanding.