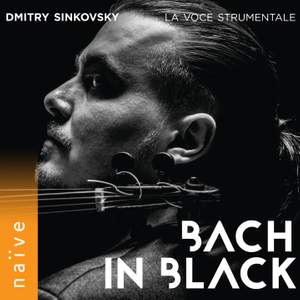 The melancholy genius of Bach, as told by the voice and violin of Dmitry Sinkovsky.

The charismatic and atypical musician, Dmitry Sinkovsky, expresses his artistry through three different musical means: as violinist, conductor and countertenor. A rare combination that Sinkovsky presents at the highest musical level on musical stages across the globe.

In his playing of multiple musical roles, Sinkovsky neatly reflects one of the main ide-as of the Baroque era: using the instrument as a singer’s voice, and, conversely, the human voice as the perfect instrument.

After virtuosic contributions as a violinist to the Vivaldi Edition, as well as a 2015 recording dedicated to the Prete rosso himself – with everything from the passion of the Four Seasons to opera arias and sacred music - Dmitry Sinkovsky now turns his hand to the ultimate musical reference: Bach.

The programme is carved around the spiritual, melancholic, oratorical and sometimes sombre force of the music of the master of Leipzig. Interspersed between the three concertos for violin and their famous adagios (in which the expressiveness of Sinkovsky’s playing is nothing short of a miracle), Sinkov-sky as countertenor sheds a new and very personal light on three of the purest jewels in the whole of music: ‘Erbarme Dich’ (St. Matthew Passion), ‘Es Ist Volbracht’ (Saint John Passion) and ‘Agnus Dei’ (Mass in B Minor).

It’s an alluring crowd-pleaser. Director, violinist, counter-tenor – multi-talented showman Dmitry Sinkovsky reminds us of the flexibility of 18th-century musicians…It’s no mere stunt; certainly these are intensely personal interpretations, and Sinkovsky wears his heart on his sleeve.

Both arrangements are utterly convincing as violin concertos...The marvellous performances are complemented by fine sound-engineering within a modern-sounding but warm, mildly resonant concert hall acoustic. The solo violin and voice are nicely balanced against the accompanying strings, with a good sense of the space around the musicians, favouring both detailed clarity and the natural tonal richness of the instruments.