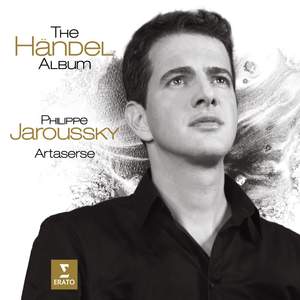 There’s certainly plenty to enjoy in this generous selection of extracts. Jaroussky’s singing is vital and buoyant, combining a light expressive touch with a high degree of accuracy; there’s... — BBC Music Magazine, January 2018, 4 out of 5 stars More…

This album, which focuses on arias from Handel’s more rarely-performed operas, is the first that Philippe Jaroussky has devoted entirely to the composer – though his Erato discography already includes complete recordings of Faramondo, Partenope and, on DVD, Alcina, and arias by Handel feature on the countertenor’s Carestini: A Castrato’s Story. Praising Jaroussky in Handel, the New York Times has described him as “incomparable … thrilling of voice.”

Now, for the first time, Jaroussky brings his impeccable Handelian credentials to an entire album devoted to arias by the composer, who produced thirty-five operas for the London stage between 1711 and 1741. For all Handel’s current popularity, comparatively few of his operas are performed with great regularity. Works such as Giulio Cesare, Alcina, Ariodante, Agrippina, Serse, Rodelinda, Rinaldo, Partenope, Orlando, and Tamerlano have achieved varying degrees of currency, but, apart from an aria from Rodelinda, Jaroussky’s new album puts the emphasis on operas we are less likely to hear in the theatre or concert hall: Amadigi di Gaula; Arianna in Creta; Flavio, re di Longobardi; Giustino; Imeneo; Radamisto (represented by no fewer than four arias); Riccardo primo, re d'Inghilterra; Siroe, re di Persia and Tolomeo, re di Egitto. A number of these operas were written for the famous castrato Senesino, who created many leading roles for Handel.

There’s certainly plenty to enjoy in this generous selection of extracts. Jaroussky’s singing is vital and buoyant, combining a light expressive touch with a high degree of accuracy; there’s a sense of focus, too, in the ensemble’s instrumental playing…he may not be a perfect singer, but he’s always an engaging one.

The disc as a whole is a joy that does indeed purvey an abundance of angelic sounds, along with some, unexpectedly welcome, that are more down-to-earth

Jaroussky’s Handel CD displays amazing vocal technique and refined taste from the first to the last note. His voice adapts exquisitely to the different qualities of each aria, and transmits all those sentiments and emotions Handel wished to describe with his music. This CD admirably fulfills its aim: the description and communication of sentiments forming the essence of dramatic music in opera.