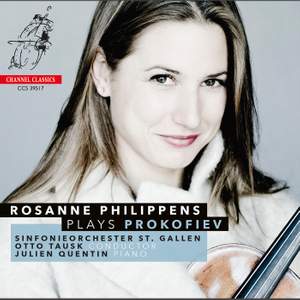 Philippens’s startling partnership with the excellent St Gallen Symphony Orchestra and Otto Tausk puts her Prokofiev Second Violin Concerto right at the top of the many recent recordings…[She]... — BBC Music Magazine, January 2018, 5 out of 5 stars More…

Prokofiev: Five Melodies for Violin and Piano, Op. 35a

Prokofiev: The Love for Three Oranges: Suite Op. 33b: March

Most of the pieces on this CD was written before Prokofiev became vexed by ideological discussions, and they reflect his quest among different cultures. With the exception of the solo sonata, they were composed in the West. Only after he settled in Moscow in 1936 did he experience the tragic fate of the great composers and writers under the Stalinist system, revered one day and maligned the next. Rosanne: “There is something special about Prokofiev's music. You realise that each and every note is painstakingly put into place, which could appear to be almost distanced and mathematical, but nothing could be further from the truth, for his music touches the soul. The perfect balance between wonderful melodies and catching rhythmic passages is also something I find really fascinating.”

Philippens’s startling partnership with the excellent St Gallen Symphony Orchestra and Otto Tausk puts her Prokofiev Second Violin Concerto right at the top of the many recent recordings…[She] also turns in the most poetic and characterful performances of the late, D major Violin Sonata…and she’s limpidly partnered by pianist Julien Quentin.