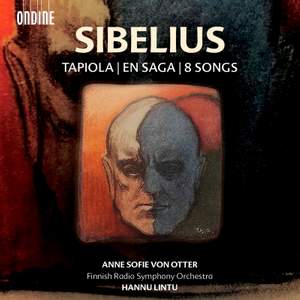 Lintu has added nothing to the familiar score [Tapiola] – just heard things it seems others haven’t heard before. Best of all is the way he draws out singing lines almost throughout the piece…I’m... — BBC Music Magazine, January 2018, 5 out of 5 stars More…

Katherine talks to the conductor about his new recording of Tapiola, En Saga & eight songs in new orchestrations by Aulis Sallinen.

This new release by the Finnish Radio Symphony Orchestra conducted by Hannu Lintu is an all-Sibelius programme featuring internationally acclaimed mezzo-soprano Anne Sofie von Otter. The album includes two major tone poems by Jean Sibelius (1865–1957), Tapiola and En Saga, combined with a set of songs orchestrated by Aulis Sallinen (b. 1935) in 2015. Sibelius’ magnificent tone poem Tapiola, written shortly after the 7th Symphony, may be regarded as the culmination of a period that began with the Fifth Symphony, a period where Sibelius created music that grew organically out of tiny germs into huge processes. It was completed in 1926 and remained Sibelius’s last great orchestral work. In Tapiola, Sibelius appears to equate the primacy of nature with the value of art for its own sake, the unattainable truths of which remain uneroded by time or by the shifting ideals of mankind. Sibelius stated to his private secretary: “My inspiration for Tapiola came wholly from nature, or even more accurately from something inexpressible in words.” The genesis of En Saga, originally premiered in 1892, is also shrouded in mystery, and even later in life Sibelius was reluctant to go into any detail regarding its content. It is among Sibelius’ earliest orchestral works, and its original title in Swedish, En saga, refers to ancient Nordic tales of heroes and gods. Although En saga is among the most popular works by Sibelius today, the premiere of the work was not a success and Sibelius revised the score in 1902. On the occasion of the 150th anniversary of Sibelius’s birth in 2015 composer Aulis Sallinen (b. 1935) orchestrated a cycle of songs for mezzosoprano Anne Sophie von Otter. This cycle of eight songs contains several less known songs in a cavalcade juxtaposing human emotions and innermost thoughts with the natural environment and experiences in nature. The recent recordings by the Finnish Radio Symphony Orchestra under Hannu Lintu on Ondine have gathered excellent reviews in the international press.

Lintu has added nothing to the familiar score [Tapiola] – just heard things it seems others haven’t heard before. Best of all is the way he draws out singing lines almost throughout the piece…I’m sure [Sibelius[ would have loved Anne Sofie von Otter’s singing, with its unique mixture of warm and cold tone and its searching musicality. Everything is recorded beautifully, with clarity and atmosphere expertly balanced.

Lintu’s Tapiola does indeed settle into one of the finest performances on record, reconciling the obvious with the mysterious...Again, [En Saga] is a superb performance: rich down below, perky up top, full of delectable solos...Von Otter’s voice may have lost some brightness but it has gained storytelling capabilities with age...One of the most striking Sibelius discs for years.