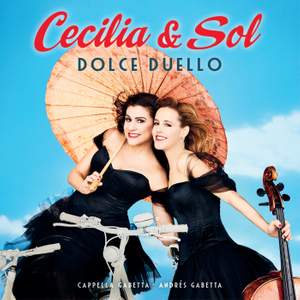 Bartoli and cellist Sol Gabetta make for valiant duelling partners who converse, parry and riposte in spirited combat. Bartoli is velvet-toned, vivacious and voluptuous as ever. Her diction is... — BBC Music Magazine, February 2018, 5 out of 5 stars More…

The Italian mezzo and Argentine cellist go head-to-head in a collection of baroque 'sweet duels' celebrating the affinity of the cello and the human voice.

Cecilia Bartoli and Sol Gabetta – two of the most captivating women in classical music – are joining together for a new album ‘Dolce Duello’ to be released on Decca Classics on 10th November. It is a collection of Baroque masterpieces which showcase the stunning combination of voice and cello in a series of dazzling duels and wondrous arias. To coincide with the release, Bartoli and Gabetta will be performing on a European tour with Cappella Gabetta and conductor and violinist Andrés Gabetta.

‘Dolce Duello’ covers almost a century of music. The new album features works by Antonio Vivaldi, George Frideric Handel, Domenico Gabrielli, Tomaso Albinoni and Luigi Boccherini, as well as three world premiere recordings: Nicola Antonio Porpora’s ‘Giusto Amor, tu che m’accendi’ from the serenata Gli orti esperidi, and two compositions by Antonio Caldara – ‘Fortuna e speranza’ from his opera Nitocri and ‘Tanto, e con sì gran piena’ from Gianguir. The composers of these works make a variety of requirements on their soloists, demanding equal commitment from both singer and instrumentalist – engaging them in a friendly duel. If the concerto is the most elaborate and extended of musical duels, the 18th century’s obbligato aria, with its pugnacious instrumental solo part, is easily the most spectacular.

From the dawn of the Baroque, the voice and cello were inseparable companions, whether they appeared together for practical reasons (the cello being part of the continuo) or for expressive purposes. The sound of the cello is often considered to be the closest to the human voice, one elegantly complimenting the other. But when they are pitted against each other something extraordinary happens – the cello pushes the voice to its physical limits, while the singer demands raw emotion from wood and strings as if it were nature’s own instrument. Reflected in the music of ‘Dolce Duello’ is the great friendship between Bartoli and Gabetta. They have known each other for years and had long been looking for a project to collaborate on. Together with a musicologist, they unearthed some beautiful works for voice and cello – three of which had never been recorded before. There are touching laments, as in Handel’s Ode for St Cecilia’s Day, as well as more energetic arias such as ‘Di verde ulivo’ by Vivaldi. Bartoli and Gabetta sparkle when they play together.

While it may be an album of duels, the true winner is surely the listener – who can bask in the joyous music from two wondrous women. ‘Dolce Duello’ is full of sweet treats for every taste.

Bartoli and cellist Sol Gabetta make for valiant duelling partners who converse, parry and riposte in spirited combat. Bartoli is velvet-toned, vivacious and voluptuous as ever. Her diction is sharp as a sabre; attack and intonation are spot on target. Add to that a gamut of vocal timbres, colours and an expressive quiver and you have an intoxicating mix. Argentinian cellist Sol Gabetta has an equally flawless technique.

Bartoli is technically astonishing, rattling off coloratura with drill-like precision but wide-eyed joy and bags of personality. Gabetta’s cello is softer-grained (and occasionally a little backwardly placed), her playing nimble and responsive to Bartoli’s ornaments in a playful game of cat and mouse...Highly calorific Baroque fun.

The performances are shot through with the same sense of effervescent, quirky camaraderie that’s on show in the booklet-photos: the emphasis is squarely on the ‘dolce’ part of the title rather than the ‘duello’, so that the atmosphere is one of congenial, collaborative music-making as opposed to the one-upmanship that often played out when castrati were pitted against trumpets in the gladiatorial arena of the opera-house.

Gabetta’s light touch is the ideal foil for Bartoli’s expressive agility, whether the two of them are sparring in separate displays of virtuosity, weaving melancholy webs around each other, or hurtling along in parallel...everything gets supple support from the ensemble led by [Sol's] violinist brother.