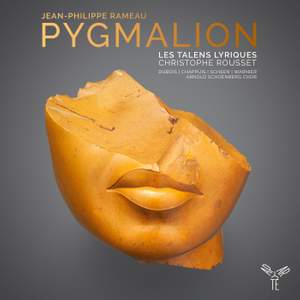 Rameau’s inventive overture fizzes, crackles and beguiles as each element demands in Les Talens Lyriques’ capable hands…[Dubois's] ardency and finesse never have any hints of strain at the top... — Gramophone Magazine, November 2017 More…

Rameau's 'acte de ballet' 'Pygmalion', was the composer's first work to bear that designation. The term denotes a one-act opera with the usual solo numbers, duets, and choruses, interspersed with dance episodes and is generally more pageant-like than plot-driven! The opera was performed 30 times in 1748 and was revived to rapturous acclaim three years later.

The story of Pygmalion dates back to Greek and Roman mythology: the sculptor of the title forswears marriage, but then falls in love with his own perfect representation of a woman, beseeching Aphrodite (or Venus) to bring her to life. In Rameau's hands, the story became a sunny romantic comedy and one of his best-loved works. Like Ovid's Love, Christophe Rousset gives life to this score and leads a new and essential reading.

Rameau’s inventive overture fizzes, crackles and beguiles as each element demands in Les Talens Lyriques’ capable hands…[Dubois's] ardency and finesse never have any hints of strain at the top of the voice...Chappuis offers passionate refinement...recordings of an unimpeachable calibre like this don’t come along very often.

Yet another exceptional addition to Rousset’s already highly distringuished discography.

It’s a delight when sung as stylishly as here...The Schoenberg choir have baroque form with Nikolaus Harnoncourt, while the dances from Les Fêtes go with real zing. Irresistible.

The playing is sumptuous, broad and vibrant. Cyrille Dubois sounds rapt and vigorous as Pygmalion, a natural for Rameau style, which is as much about acting as singing. Céline Scheen is more piquant as the statue.

The seventh in their series of recordings of Lully operas, and that experience and expertise is apparent in pretty much every note of this performance, they bring out the drama, colour, and the comic touches of much of Lully’s lavish royal entertainment … it’s a strong cast, a bold and colourful performance … and an excellent recording.