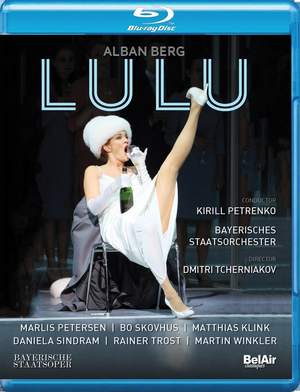 Lulu, Alban Berg’s hauntingly mysterious opera in a new production by Dmitri Tcherniakov, has been one of the major events of the 2015 Bayerische Staatsoper season : an ideal setting for conductor Kirill Petrenko first-ever DVD recording ! A sensuous and impenetrable opera, Berg’s masterpiece depicts the burning and sometimes bestial intensity of human relationships through the figure of Lulu, the true femme fatale, bearer of an enigma that haunts us way beyond the end of the opera. Venenous, sibylline, deathly for who approaches her, the dangerous Lulu destroys the established and bourgeois order she evolves in, carrying away with her all certainty, just like the audacious and demanding musical language Berg invented to give form to this unreachable character. Frank Wedekind’s work proved indeed to be an extremely fertile ground for the dodecaphonic composer’s imagination, and gave birth to one of the most singular and ambitious work of art of the twentieth century. With the privilege of a dream cast, gathering Berg’s best interprets, this new production of Lulu is conducted by Kirill Petrenko, and staged by Dmitri Tcherniakov. A visionary genius considered as the contemporary stage ‘enfant terrible’, it is with a shattering realism that he directs those characters, hostages to their own passions and darkest fantasies, and reveals the complexity of this great human and social tragedy. Marlis Petersen is Lulu, a role she was then singing for the ninth time, and which awarded her, for this production, the title of ‘singer of the year’ by German magazine Opernwelt

Tcherniakov’s design sees right through Lulu, and finds at her heart an old-fashioned love for Dr Schön that will never die…Much then depends on Marlis Petersen and Bo Skovhus. They both turn in tremendous performances…Petersen is a fearlessly cantabile Lulu…Skovhus entwines Dr Schon and Jack as two strands of the same rope, singing with tireless clarity and virility.

Even if you already possess a Lulu on DVD…I'd say this one is absolutely not to be missed...what the DVD offers the home spectator overall is a top-to-bottom re-encounter with the work.