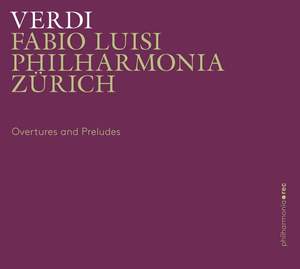 Giuseppe Verdi composed over 30 operas, though only about half of them are still regularly staged. For the latest studio recording with the Philharmonia Zürich, Fabio Luisi has chosen overtures and preludes from Verdi’s whole creative period. Next to popular masterpieces like the overture to La forza del destino, the selection ranges from the earliest works by Verdi, which strongly remind of Rossini and Donizetti, over exceptional preludes he wrote for Macbeth or La traviata for example, to rarely performed overtures such as I vespri siciliani or La battaglia di Legnano. A special highlight on this recording is the long version of the overture to Aida, which is never heard in combination with opera. Furthermore, the ballet music for the French version of Don Carlos also found its way onto the album. Thus, the compilation unites pieces that belong to the day-to-day repertoire of the Philharmonia Zürich with those that are also rarities to orchestra musicians.