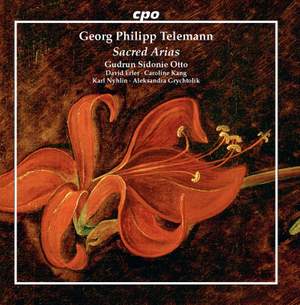 Telemann: Am Festtage Michaelis, TWV 1:335a

Magdeburg Sunday Concerts, Vol. 2 New chamber compositions by Telemann are now made available through intensive research. They are presented in modern score editions focusing on the Magdeburg Sunday Concerts (Sonntagsmusiken). klassik.com described cpo’s first CD with Advent and Christmas cantatas as ‘A treasure trove of brilliant sacred arias!’ The arias on the second disc involve pieces taken from complete sacred compositions and performed in Hamburg’s principal places of worship during the church year 1726-27. The two arias contained in a particular sacred composition were removed from their context for the purposes of publication. The Eisenach court secretary Johann Friedrich Helbig was the author of the texts for the church compositions and the arias included in them. Telemann packed a great deal into the concentrated aria space. It could be said that he balanced the minimum ensemble with compositional intensity and complexity in respect of melodic formation as well as with the thematic design of the basses, forceful declamation and rhythmic scheme, and the large spectrum of keys and harmony.