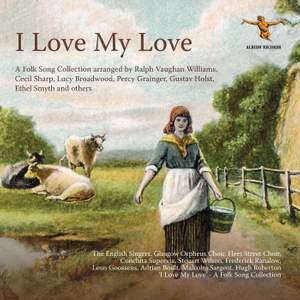 I Love My Love

This Vaughan Williams Society disc, based on 78rpm records collected by David Mitchell, opens a window on a lost England of folk songs and arrangements...and a style instantly pinnable to its... — Sunday Times, 20th August 2017 More…

5 English Folk Songs: No. 3, Just as the Tide Was Flowing

8 Traditional English Carols: No. 4, Down in Yon Forest

Vaughan Williams: An Acre of Land

It's of a Lawyer

Folk Songs from Somerset, Series 3: No. 63, The Keys of Canterbury

trad.: Bound for the Rio Grande (arr. S. Wilson for voice and piano)

Marjorie Kennedy-Fraser: Songs of the Hebrides

Folk Songs from Somerset, Series 2: No. 33, The Crystal Spring

I Will Give My Love an Apple

I Love my Love is a collection of remastered 78 rpm recordings of folk songs. It focuses on folk songs of classical beauty, presented in generally straightforward arrangements, collected in the early years of the 20th century. There is a depth of humanity in these songs that connects us to a not-so-distant past. The stories and sentiments they describe, of love, war, courtship, separation and the vagaries of the seasons, can make us smile, empathise and, sometimes, still move us to tears.

This Vaughan Williams Society disc, based on 78rpm records collected by David Mitchell, opens a window on a lost England of folk songs and arrangements...and a style instantly pinnable to its period, as in Adrian Boult’s first recording of Butterworth’s A Shropshire Lad.

the era it captures is not that of the original folk traditions but that of the civilising arrangements in which 20th-century composers clothed them: cut-glass accents and deftly anachronistic piano accompaniments...a touching reminder of a frightfully polite age.