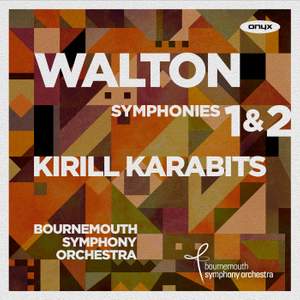 One notoriously tricky passage after another…is brought off with top-flight panache and accuracy…Brilliant precision in the Scherzo, successful avoidance of over-emotive juice-extraction in the... — BBC Music Magazine, January 2018, More…

Walton’s First Symphony burst onto the musical scene in 1935 and quickly became recognised as a masterpiece. The influence of Sibelius and Beethoven can clearly be heard, but it is Walton’s brilliant use of the orchestra and grasp of form that shines through: a remarkable achievement for a composer of 33 years. The Second symphony has never had an easy time, in both escaping the shadow of its older sibling, and in overcoming the hostility of the late 1950s and early '60s when avant-garde was de rigeur. Fortunately it is now clearly a masterpiece to rank alongside No.1. It is assured, mature and confident, subtle and refined, from a composer at the top of his game. High voltage performances from Kirill Karabits and the Bournemouth Symphony Orchestra.

The Bournemouth Symphony Orchestra is Classic FM’s Orchestra in the South of England. It was formed in 1893 and throughout its illustrious history it has worked with some of the finest composers, conductors and musicians in the world including Elgar, Bartók, Sibelius, Holst, Stravinsky, Vaughan Williams and Sir Thomas Beecham.

One notoriously tricky passage after another…is brought off with top-flight panache and accuracy…Brilliant precision in the Scherzo, successful avoidance of over-emotive juice-extraction in the slow movement, an immaculately paced finale, and warm and super-clear sound-quality all contribute to a recording that’s something special.

Right from the start Karabits impresses… the orchestral playing is thrusting and full of energy.

Brass and woodwind shine throughout, and the BSO strings sound punchy and lithe.

Karabits’s reading of the First is suitably intense and monumental… the opening is organic and momentous.

A compelling case is made for both works by the Bournemouth Symphony Orchestra, directed by Kirill Karabits.

Karabits has plenty to say and a real feel for Walton’s verve and panache… The sound they’ve captured in the Lighthouse in Poole is excellent. From the surges of energy in the strings at the opening of the first symphony to the crisp brass fanfares at the start of the finale.