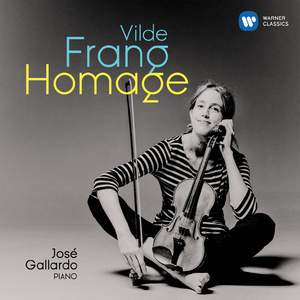 Frang is on supremely agile and graceful form, but it’s rather a musical pick-and-mix. — BBC Music Magazine, Christmas 2017, 4 out of 5 stars More…

Vilde Frang’s Encores is more than a captivating programme of short pieces for violin and piano, it is also a homage to the players of the Golden Age of the Violin, such as Fritz Kreisler, Leopold Auer and Joseph Szigeti. The recital includes music originally conceived not just for the violin, but also for piano, orchestra or voice, and proves once again, as BBC Music Magazine wrote, that “Frang has the knack of breathing life into every note, whether by variations in phrasing, attack, tone or dynamic.”

Vilde Frang has conceived the album as something of a homage to her illustrious predecessors. Born in 1986, she is clearly very much a violinist of today, and – as a Norwegian trained in Germany – she did not grow up in the Central and Eastern-European tradition of Heifetz, Kreisler, Auer and Szigeti. That being said, she brings her own, distinctively captivating magic to her instrument. As Gramophone wrote of her performance of the Korngold concerto, a work that has its roots in the composer’s glorious late-Romantic scores for Hollywood: “Frang has a winning way with the rubato that makes the melodies yearn and smile, but there’s a fragile thread of silver woven through her passagework that bounces off the glinting accompaniment of the Frankfurt RSO as an opalescent gown catches the light in a mirrored ballroom. Fresh thought illuminates each phrase and she has the technique to bring off every idea, from the wild caprice of the first movement’s dash to the double-bar, to a coquettish (or demure?) restraint in the finale’s big tune.”

Frang is on supremely agile and graceful form, but it’s rather a musical pick-and-mix.

‘Homage’ treads a route that leads back to recitals where, after the interval, the greats of yore would follow the last principal work on their programme with musical sweetmeats very much along these lines. Frang occasionally hints are those stylistic prompts…All receive winning performances.