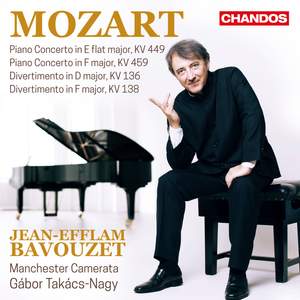 Bavouzet reveals himself a Mozartian every bit as mercurially imaginative and technically audacious as he already has been In the piano music of Haydn…The collaborative vigour of the concerto... — BBC Music Magazine, November 2017, 4 out of 5 stars More…

The effervescent and communicative energy of Bavouzet and Takács-Nagy is encapsulated again in this second volume of their Mozart series. These exhilarating interpretations of Mozart’s piano concertos of 1784, faultlessly supported by the Manchester Camerata, follow highly praised concerts as well as a first volume which was ‘Editor’s Choice’ in Pianist.

The two concertos presented here are among the six that Mozart composed in Vienna in an extraordinarily productive year. As Bavouzet states in an exclusive personal note, they ‘share their association with operatic and symphonic styles. The contrasts of mood in their first movements and the cantilenas which serve as second movements relate them more closely with music for the operatic stage, while their finales are conceived in purely instrumental terms and make reference to the symphonic domain. On the other hand, these two works are complete opposites as far as their use of wind instruments is concerned. In KV 449 their inclusion is ad libitum, whereas they very often play the principal role in KV 459.’

Bavouzet reveals himself a Mozartian every bit as mercurially imaginative and technically audacious as he already has been In the piano music of Haydn…The collaborative vigour of the concerto readings proves still more attractive. Particularly in the finales, buoyancy and moments of relaxation are balanced in a way that brought smiles of pleasure to this listener’s face.

The E Flat Major, K449, is especially ebullient, its zest bubbling up from sparkling finger- work, but the F Major, K459, is hardly less inspiring. Gábor Takács-Nagy and the lively Manchester Camerata add a couple of frothy early divertimentos.

Bavouzet enjoys the pomp of the piano’s first entry in the opening movement of K449 but also its inward qualities, some of the most memorable moments comings when he is accompanying the orchestra. Highlights are too many to list but the solemn slow movement is certainly one of them.

The well-known K459 is sprightly and fresh, with delightful give and take between orchestra and soloist. The finale scampers wonderfully in one of the best performances available; Mozart’s cadenza is brilliantly done.

Bavouzet’s sprightly and incisive playing brings out all the detail, with tiny nuances that bring the lines to life...More soon, I hope.