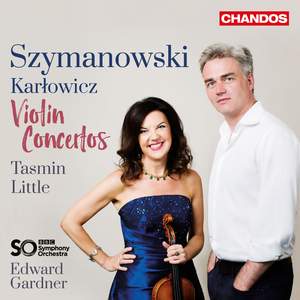 This programme makes undeniable sense. All three works were written in the space of around 30 years, and their composers shared a love of the Tatra Mountains…[Little] doesn’t initially let herself... — BBC Music Magazine, November 2017, More…

Violin Concerto in A Major, Op. 8: I. Allegro moderato

This SACD recording brings together some of Chandos’ greatest artists in a spellbinding programme.

It follows performances that The Guardian described as ‘a thrilling show of ferocity and feistiness’, given by the same forces in January at the Barbican. After widely acclaimed recordings of Walton’s and Lutosławski’s violin concertos, Tasmin Little again joins the BBC Symphony Orchestra conducted by Edward Gardner, in intensely expressive interpretations of the concertos by the Polish composers Karłowicz and Szymanowski.

All were written within the space of a generation (1902, 1916, and 1933), and yet they belong to quite different worlds. One was composed at a time of national occupation, another in the throes of wartime, and yet another at a time of national renewal. The first inhabits the lyrical tradition developed by Mendelssohn and Tchaikovsky, the second escapes towards Debussy and the exoticism of Mediterranean influences, while the third is imbued with the folk culture of the Tatra Mountains.

This programme makes undeniable sense. All three works were written in the space of around 30 years, and their composers shared a love of the Tatra Mountains…[Little] doesn’t initially let herself go. Yet working closely with Edward Gardner and the BBC SO, eventually she enters the music’s seductive web.

It’s not all show; she is sensitive to dynamics too…The BBC Symphony Orchestra, under the astute direction of Edward Gardner, offer keen support…[in the Szymanowski] Little’s lustrous tone and ethereal top notes are bathed in an orchestral accompaniment that glitters and glistens.

Tasmin Little can certainly take her place alongside these, and could be a first choice for the Szymanowskis.

Tasmin Little displays a musicianship that consistently marks her out as fully the equal, and in many respects the superior, of any violinist currently before the public … A terrific disc, of high distinction.