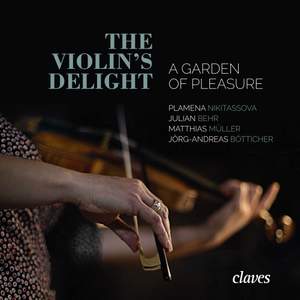 The Violin's Delight - A Garden of Pleasure

Splendidly appointed courts, such as those found in Vienna, Salzburg and Dresden, cultivated a noble art of intellectually refined entertainment, which included imitative programme pieces along with musical “bizarrities” of the sort that was especially cherished by Olomouc Prince-Bishop Karl Liechtenstein-Castelcorn, situated in the Moravian town of Kromeriz, and which he specifically requested in letters to his resident composers. The spectrum of means mobilised to this end ranged from feigned polyphony on the melodic instrument of violin achieved through double stops and the deliberate mistuning of strings to create unusual resonances (scordatura) up to experimental incursions on the boundaries of Baroque harmonics, with some pieces generating ear-provoking sound effects that would typically be ascribed to 20th century modernism. Not rooted in any desire to please, this sphere combined occult harmonic speculation with bold wit and unbridled virtuosity, evincing the instrumental style’s growing emancipation from the vocal movement framework and demonstrating how artistic skill could provide a rare opportunity for social advancement within a rigid class-based society – as astonishingly attained in the personal biographies of figures like Biber, Schmelzer, Walther and Kerll.