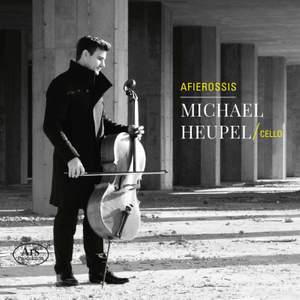 Michael Heupel writes of his new release: “The Greek word afierossis can be translated as ‘dedication’; it contains the root iero meaning ‘sacred.’ To my mind, the bond created by the dedication between a piece of music and its dedicatee is sacred. Just like any other work of art, music has a life beyond the passage of time. For as long as it is performed or listened to by humans, a piece of music is immortal, and some part of that immortality is conferred upon the dedicatee by means of the dedication. On this recording I have sought to collect a range of more or less well-known works for solon violon-cello from the 20th and 21st centuries. Each work bears its own dedication- to a performer such as Mstislav Rostropovich, to a politician such as Gyorgy Aczel, and even to a fictional character like Alexander Knight. I am happy and honored to be the dedicatee of Efi Markoulaki’s Cretan Suite. The selection of contemporary works presented here is both versatile and varied…I approached the selection of works on this programme with great respect and appreciation. After immersing myself into each work to find its central message, I sought to interpret it as faithfully as I could. I hope that these works will offer an equally intense experience to the listener as they do to me during each performance…” Michael Heupel is a sought-after soloist and chamber musician. He has performed at prestigious concert venues such as the Laeiszhalle in Hamburg, the Megaron in Athens, the Concertgebouw in Amsterdam, and Stuttgart’s Liederhalle. He appears regularly at international music festivals including the Schleswig-Holstein Music Festival, the Festivals of Athens and Epidaurus, the Euro Music Festival, and more. His performances and interpretations have been praised by the press.