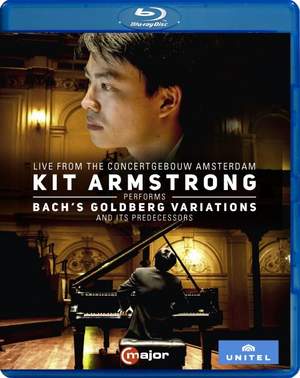 The main focus of the programme is JS Bach’s Goldberg Variations, which Armstrong reads with assurance, refinement and a maturity beyond his years. His sound is pearly, highlighting the work’s... — BBC Music Magazine, December 2017, More… 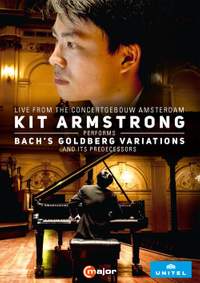 When Kit Armstrong was only 14, he overcame his mentor Alfred Brendel’s reluctance to take on pupils. According to Brendel: 'He played so beautifully that I thought to myself, "I have to make time for him". It was a performance that really led you from the first to the last note'. Soon Armstrong was winning international prizes both as pianist and as composer and was appearing as soloist at some of the world’s foremost venues. At the Concertgebouw, Armstrong mesmerized his audience with Bach’s monumental Goldberg Variations – preceded by earlier polyphonic variation masterpieces by William Byrd, Jan Pieterszoon Sweelinck and John Bull.

The main focus of the programme is JS Bach’s Goldberg Variations, which Armstrong reads with assurance, refinement and a maturity beyond his years. His sound is pearly, highlighting the work’s lyricism, and tempos are beautifully judged for the hall’s ample space…Above all, though, he builds the music’s architecture.

Armstrong has the ability to reduce his sound to the merest whisper while retaining projection; intellect is completely in the service of music. The Aria unfolds absolutely naturally, while the immediately following music reveals Armstrong’s rock- solid rhythm. Armstrong’s mastery of tone, his ability to project the most tender expression and his long- range vision contribute to a stunning performance.