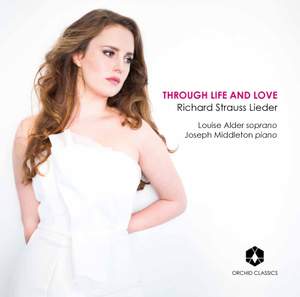 Alder can do it all, and there are already plenty of colours in the voice. — BBC Music Magazine, October 2017, 5 out of 5 stars More…

The award-winning young British soprano talks to us about her debut solo recording, 'Through Life and Love', out now on Orchid Classics.

Hailed as ‘one of the brightest lyric-sopranos of the younger generation’, ‘a radiant performer’ and ‘a born actress’, Louise has been held in high critical acclaim during her early career, and has recently been declared Young Singer of the Year at the 2017 International Opera Awards. She is also no stranger to Lieder, and has worked with pianist Joseph Middleton previously at the Leeds Lieder Festival. Joseph is considered a specialist in the art of song accompaniment, and has be en described as ‘one of the brightest stars in the world of song and Lieder’ by BBC Music Magazine, ‘the cream of the new generation’ by The Times and ‘a perfect accompanist’ by Opera Now. Through Life and Love sees Louise and Joseph perform some of the most beautiful Lieder in the repertoire, including Strauss’ Die Nacht, Standchen and Rote Rosen. Louise represented England at the BBC Cardiff Singer of the World competition this year (reaching the finals of the Main and Song Competition, and winning the Audience Prize); this is her debut recital recording.

Alder can do it all, and there are already plenty of colours in the voice.

Each song sounds utterly fresh, with the bright, flinty beauty of Alder’s soprano constantly conveying lively intelligence as well as strong characterisation. The interpretations are natural and confident, her German vividly pointed...Middleton’s piano-playing is superb throughout as well, offering perceptive, lively and sensitive accompaniment entirely on Alder’s wavelength.

Louise Alder’s exemplary German diction is pure, long-breathed line and clear identification with the emotional import of the poetry all serve her very well here. She is by no means the first singer to present these songs. Joseph Middleton’s pianism is exemplary, as is the recorded sound.

That Alder is a Strauss (and Mozart) soprano of rare gifts has been obvious for quite a while. Her radiant, silver-flecked-with-gold tone, long-breathed phrases and exquisitely floated high notes are a prerequisite for this repertoire, but she also has excellent German diction...she brings vivid interpretative qualities, aided by her superb pianist, who relishes the rippling arpeggios of Ständchen.

she sings [Zueignung] with unusual and touching introversion and contemplation. All are sung with vivid narrative skill, rich in colour and detail, and with a stunning purity of tone on long notes (as in the “Ruhe” of Ruhe, meine Seele!). Alder is beautifully partnered by pianist Joseph Middleton.

This imaginatively conceived and beautifully recorded recital makes a perfect calling card for this fresh- voiced young singer. Grouping Strauss songs in groups- youth, longing motherhood and so on – Alder is acutely responsive to text and texture with winningly unshowy technique and seamlessly pure tone. Middleton, on equally fine form, again demonstrates he’s one of the most talented, intuitive collaborative pianists of his generation.