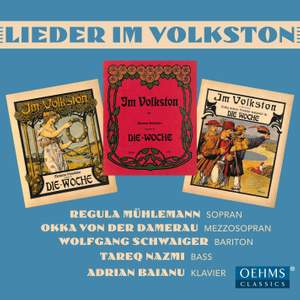 Songs in the Style of Folk Music

The Berlin weekly journal Die Woche, issued from 1899 to 1944 by the publisher August Scherl, announced a composition competition in 1903 with the aim of encouraging new songs 'im Volkston' (in the style of folk music). Prominent composers of the time were approached by the publishers for this competition and asked to send in an appropriate song. Of the songs submitted, thirty were selected and published in a special issue that was available in shops. At the first performance of the songs of this first competition, however, it became clear that many of these songs were indeed in a folk-music style, but due to their complexity they were rather closer to the genre of the art song. For this reason, the publisher August Scherl decided to hold a second competition during that same year. This one was basically run in the same way, but this time composers were not approached directly; this time there was a public announcement in the journal Die Woche. In addition, special emphasis was to be laid on brevity, easy singability and comprehensibility. The best and most beautiful of these songs are represented on this recording. As a bonus, we have also included Waldeinsamkeit ('Forest Loneliness') by Max Reger with Regula Mühlemann. This song was submitted by the composer but rejected by the jury - hard to believe.