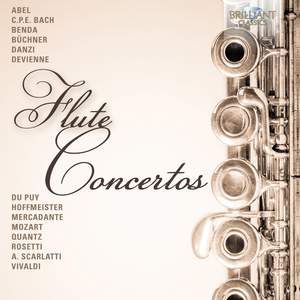 Mercadante: Concerto No. 4 in G Major

Büchner, F: Concerto in F minor for flute and orchestra

A wonderful selection of concertos and other works featuring the flute from the 18th and 19th centuries, this box showcases 14 composers who championed the flute, each in their own way, with refined and idiomatic music for the instrument. Vivaldi and Alessandro Scarlatti (father in the musical Scarlatti family) were active during the 1720s, an era of transition from the end-blown recorder to the more powerful and easily tuned side-blown transverse flute common today. The works in this set by Scarlatti include concertos for both, while the modern flute is the star of the remaining music, from Vivaldi’s complete Op.10 concertos through to the fine F minor concerto by Büchner, a 19th-century German composer active in Russia.

C.P.E Bach, Benda and Quantz all served in the court of Frederick the Great – a gifted amateur flute player who demanded works for his instrument from the musicians in his employ – and this accounts for the great contribution these three composers made to the repertoire. From later in the 18th century we have the inventive and idiomatic flute music of Mozart, along with that of several of his contemporaries, Germans Danzi and Hoffmeister, the Bohemian Rosetti, and the Frenchman Devienne, whose worthy music was thankfully revived in the 1960s by Jean-Pierre Rampal. Joining Büchner in the 19th century are the Italian Mercadante and Swiss-born Du Puy who was active in Scandinavia. Both noted opera composers, their sense for breath and melodic line no doubt informed their fine flute music.

Authentic performance is also represented in this 12CD set, with Mario Folena joining Vivaldi specialists Federico Guglielmo and L’Arte dell’Arco, and Federico Maria Sardelli and Ugo Galasso soloing on both flute and recorder with Modo Antiquo – all on period instruments. Iceland’s Nordic Affect period ensemble features Georgia Browne in flute music by Abel, who wrote his chamber works for his pioneering London subscription concerts, organised with his friend J.C. Bach.

Another special feature in this treasure box of flute gems is Mary Oleskiewicz’s world premiere recording on Baroque transverse flute of four concertos by Quantz, a composer synonymous with the flute for his important contributions to the instrument’s pedagogy, technology and repertoire.

This 12 CD set contains a generous collection of solo concertos for the most popular of wind instruments, the flute.

Traversing more than two centuries the collection presents concertos by the great Baroque Masters Vivaldi, C.P.E. Bach and Alessandro Scarlatti, continuing into the classical era with concertos by Abel, Mozart, Benda, Danzi, Hoffmeister, Rosetti and Quantz, and finally arriving in the romantic era with Devienne, Mercadante, Dupuy and Büchner.

A treasure trove of the known and lesser known, a feast of sparkling, melodious and brilliant flute concertos for both the serious collector and the classical starter!