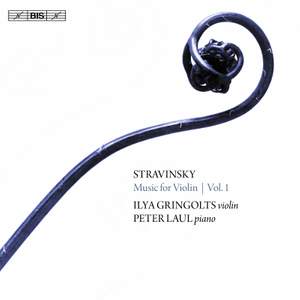 Extremely enjoyable – each re-listening only heightens my pleasure in the programme and all the performances – and extremely valuable in its illumination of an important subsidiary aspect of... — BBC Music Magazine, December 2017, 4 out of 5 stars More…

In his autobiography, Igor Stravinsky wrote of his not having had any ‘great liking’ for the combination of strings and piano. That there nevertheless are a number of chamber works by him featuring the violin is to a large extent due to the violinist Samuel Dushkin. The two were introduced to each other by Stravinsky’s German music publisher who wanted to persuade him to compose a violin concerto. They obviously hit it off: their collaboration continued after the concerto had come into being in 1931, and they devised a recital programme to perform together on tours.

The centrepiece was Duo concertant which Stravinsky completed in 1932 as his only original composition for violin and piano. Rather than looking for common ground between the two instruments, Stravinsky aimed to emphasize their individuality in a work that he himself claimed was ‘determined by my love of the pastoral poets of antiquity and their scholarly art and technique’. The other pieces on this disc are, with one exception, arrangements of Stravinsky’s own works including The Firebird, Petrushka and Le rossignol. The majority were made for and in collaboration with Dushkin, but a few come from the 1920s and were intended for the violinist Paul Kochanski.

One of these is the Suite for violin and piano, arranged from the ballet Pulcinella – material that Stravinsky revisited in the 1930s in order to make a new version for Dushkin. (The resulting Suite italienne will appear on the second and last volume of Stravinsky’s music for violin, together with the violin concerto and other works.) With this programme, and in the company of the eminent Russian pianist Peter Laul, the highly virtuosic and temperamental violinist Ilya Gringolts makes his return to BIS, the label for which he made his début recording in 1999.

Extremely enjoyable – each re-listening only heightens my pleasure in the programme and all the performances – and extremely valuable in its illumination of an important subsidiary aspect of the composer’s artistic outlook…[Gringolts and Laul] find in each a poise and simplicity of tone and manner that strike one as instinctively right. Where needed the virtuosity is unfailing, but there too the right balance is unfailingly struck.

[The Russian Maiden’s Song and Pastorale are] both played by Ilya Gringolts with a feeling of insouciance that I find delectable…Gringolt’s playing is pure filigree (immaculate harmonics in the Serenata) while both he and pianist Peter Laul combine delicacy with a sense of play, the latter best demonstrated in the Tarantella.