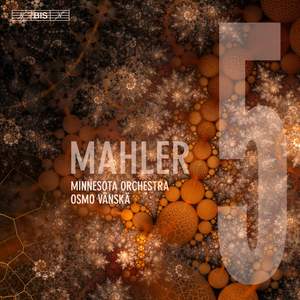 Rhythmically very taut, clean and just a little unusual…The conductor holds focus in what can sometimes be a turgid sequel to the opening funeral march; the scherzo flies…And the finale is just... — BBC Music Magazine, November 2017, 4 out of 5 stars More…

Recording of the Week,  Osmo Vänskä and the Minnesota Orchestra launch a Mahler cycle with Symphony No. 5

As a team, Osmo Vänskä and his Minnesota Orchestra began their collaboration with BIS in 2004. Launching a Beethoven Symphony cycle that made reviewers worldwide sit up and take notice: ‘a modern reference edition’ was the verdict from ClassicsToday.com, while Gramophone described it as ‘a Beethoven reforged for today's world’. Twelve years later saw the release of the third and final disc in the Minnesota-Vänskä cycle of Sibelius's symphonies, with individual discs receiving distinctions such as a 2014 Grammy Award (for Symphonies Nos 1 and 4), Gramophone's ‘Editor's Choice’, ‘Orchestral Choice’ in BBC Music Magazine and inclusion on the annual list of best classical recordings in the New York Times. The present disc launches yet another series, of even more monumental proportions, with Gustav Mahler's Fifth Symphony, recorded by the orchestra under Osmo Vänskä in Orchestra Hall in Minneapolis in June 2016. Composed in 1902, the purely instrumental work followed upon three symphonies that had all included vocal parts. This and the opening trumpet motif, an allusion to the rhythm that begins Beethoven's Fifth have been interpreted as Mahler's return to a more conventional idea of the symphonic genre. Other features are less traditional, however – a sometimes bewildering mixture of musical idioms reminds us of the melting-pot that Vienna was at the time, with allusions to Austrian, Bohemian and Hungarian styles. To an unsuspecting audience, the famous Adagietto for strings and harp – probably the best-known of all of Mahler's music – must also have been surprising, appearing at the heart of a work which is otherwise lavishly scored and orchestrated.

Rhythmically very taut, clean and just a little unusual…The conductor holds focus in what can sometimes be a turgid sequel to the opening funeral march; the scherzo flies…And the finale is just perfect: not a lazy phrase in all that welter, an emphatic trumping of all that’s gone before as the chorale blazes out in full might and a thrilling final rush.

The orchestral playing is crisp, the conductor’s clinical tendencies tempered by an understanding that emotional extremism is an essential part of Mahler’s idiom even if it need not be indulged

This performance has many virtues… I found much to enjoy in the performance and I shall be very interested to hear what Osmo Vänskä – and the BIS engineers – make of the Second and Sixth symphonies.

While in a few places this recording is arguably not quite as searingly white-hot in its intensity as some others, Vänskä’s more controlled approach pays enormous dividends at the climaxes, helped hugely by fantastic brass: their chorales in the second and fifth movements blaze powerfully. The Minnesota strings also excel themselves: in contrast to the radiant brass, there are some exquisite passages at the other extreme of volume.

The players certainly sound overjoyed to be recording again with their charismatic Finnish maestro. This symphony showcases their virtuosity in all sections... The players round off with an electrifying, dramatic account of the Rondo, captured in fabulously “present” sound.

There’s something admirably unhistrionic about Vänskä’s approach, but there are times when his determination to stop the performance from getting overheated holds things back...Against that, both the funereal opening and the joyous release of energy in the finale are superbly stage-managed, and the orchestral playing is exceptional throughout.