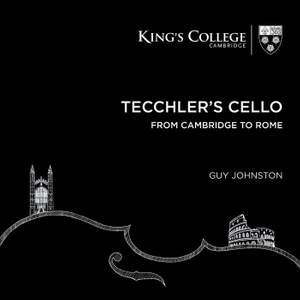 Tecchler's Cello: From Cambridge to Rome

Guy Johnston, one of our most exciting and versatile British cellists, began his musical journey as a chorister in the world-renowned Choir of King’s College, Cambridge, under the tutelage of Stephen Cleobury. He went on to achieve early success through the BBC Young Musician of the Year title, the Shell London Symphony Orchestra Gerald MacDonald Award, and receiving a Classical Brit Award.

Guy now plays a 1714 Tecchler cello and in its third centenary he set out to celebrate the life of the instrument, and its creator, commissioning a number of new works. He explains: "I began to ask myself lots of questions – How did David Tecchler end up settling in Rome, who was he making cellos for, and how did this cello come into my hands? What is my journey and role as a cellist in the 21st century? I decided to mark this anniversary by commissioning three works as gifts for the cello by celebrated British composers David Matthews, Mark Simpson and Charlotte Bray. I asked them to think of the role of the cello in the last three centuries and to let their imagination run wild."

Guy’s inspiration led him to Italy, taking his cello back home to get to the root of some of these questions. Joined by friends from both countries, recorded at locations close to his heart, and featuring works from across his cello’s 300 years, this album traces that musical journey, from Cambridge to Rome.

This release is presented by King’s College, Cambridge and joins the King’s Choir’s critically-acclaimed recordings, including Bach’s 'St John Passion', recently released on the anniversary of its first performance. Guy’s discography includes celebrated albums for Naxos, Harmonia Mundi and Chandos. The release will be accompanied by an extensive international, multimedia press and marketing campaign.

This is a lovely idea: the Tecchler of the disc title is Johnston’s David Tecchler cello, which celebrated its 300th birthday in 2014. To mark this occasion, Johnston commissioned three new works (by Matthews, Simpson and Bray), which receive their recording premieres. Imaginatively conceived and beautifully performed, this disc is a winner.