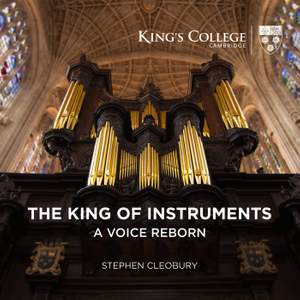 The King of Instruments - A Voice Reborn

On the whole, the organ is a pretty flexible beast, best in the Mendelssohn and Franck where heavy diapasons and rounded reeds make all the difference, but less spectacular in Bach, its mixtures,... — BBC Music Magazine, October 2017, 4 out of 5 stars More…

The Harrison & Harrison organ in King’s College Chapel is, like the College Choir, famous the world over. The organ case with gilded pipework is a striking feature of nearly every depiction of the interior of the Chapel, while the instantly recognisable sounds of the instrument have become inextricably associated with those of the Choir.

In January 2016 the organ and all its 4,300 pipes was removed from King’s College Chapel for the most significant restoration since the 1960s. Just nine months later, the project was completed with the famous organ secured for future generations. Recorded just a few months later, this album celebrates its voice reborn, in a programme that shows off this magnificent instrument at its very best.

A former president of the Royal College of Organists, Stephen Cleobury gives regular performances in the weekly recitals at the King’s Chapel, while his recordings have been championed for their virtuosity and musical insight. This release joins other critically-acclaimed recordings from King’s College, Cambridge, notably Organ Works: Liszt, Reubke, Mendelssohn, which was the first [Dolby Atmos] surround sound recording of this great organ. Gramophone praised Cleobury’s playing: “If you are not at the top of your game, there is little point in tackling the ferociously demanding Liszt and Reubke works - and Stephen Cleobury is on peak form.”

On the whole, the organ is a pretty flexible beast, best in the Mendelssohn and Franck where heavy diapasons and rounded reeds make all the difference, but less spectacular in Bach, its mixtures, pedal reeds and mutations a little ’English’ and understated for this repertoire

Six of [Bach's] chorale preludes are highly absorbing, not least because Cleobury finds a different registration for each. Franck’s Pièce héroïque mines a deep shaft of basso sonority that contrasts with the prevailing textural delicacy, and indeed deliciousness, of the Bach and a Mendelssohn sonata. The effect is magnificent.