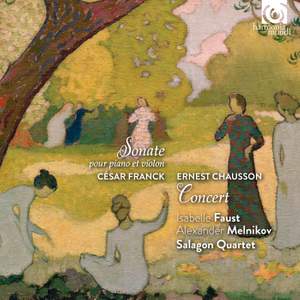 gut strings and an Erard piano from around 1885 help to create the welcome impression that we are in a Parisian salon, listening up close. The Erard has a rich, woody depth of tone; play no louder... — BBC Music Magazine, August 2017, 4 out of 5 stars More…

James is enthralled by a new recording of music for violin and piano by César Franck and Ernest Chausson.

The 'Sonata' is Franck’s most frequently played and recorded work. Premiered by Eugène Ysaÿe, in Brussels on 16 December 1886, a judge as shrewd as Alfred Cortot was lucid enough to make an arrangement for solo piano. Since then it has been transcribed for nearly every instrument on the planet and is a permanent staple of the repertoire.

Although it is devoid of passages in double stopping or pizzicato, the violin part, replete with treacherous chromatic twists and turns, nonetheless poses formidable difficulties of intonation.

Franck's influence on Ernest Chausson's 'Concert' is unmistakable. A late-Romantic hybrid, the work blends elements of piano and string quintet styles and here regains a freshness which delicately illuminates, in the hands of Faust and Melnikov. Completed a year after the Symphony in B flat, and again written for Ysaÿe, the 'Concert' asserts its roots in the heritage of Rameau and Couperin, thus foreshadowing Debussy’s 'Hommage à Rameau' (1905) and Ravel’s 'Le Tombeau de Couperin' (1917).

gut strings and an Erard piano from around 1885 help to create the welcome impression that we are in a Parisian salon, listening up close. The Erard has a rich, woody depth of tone; play no louder than a whisper yet without losing eloquence is surely facilitated by the gentle plangency of her strings.

Faust and Melnikov are utterly spellbinding. It might not be quite like any performance you’ve heard of the Franck sonata before, but that makes it all the more welcome; a genuine delight.

this disc is an absolute keeper; it’s sensational … it’s hard to imagine that Ysaÿe could have done better