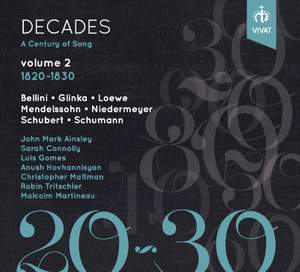 Glinka: Tell me Why

Glinka: Do Not Tempt Me Needlessly

The second volume in this major recording series, across which a host of world-renowned singers draw listeners, decade by decade, through a century of song, from 1810 to 1910. Each volume features a carefully planned, varied programme performed by household names, whilst the series overall creates a comprehensive survey of song right through the nineteenth century – an invaluable teaching asset, as well as a joy for listeners.

It’s a very clever cross-section: it’s taking that decade and going across the continents … it gives you a real snapshot … collating them together, and not necessarily going for the obvious ones, that’s what I love about this collection.