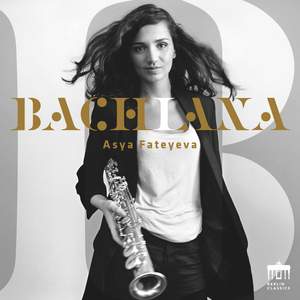 Johann Sebastian Bach is revered by musicians and music lovers around the world. The German weekly Die Zeit has described him as the “fount of all music,” and violinist Yehudi Menuhin had a very simple explanation for our continuing fascination with Bach’s works: “He represents something greater within us.” Classical saxophonist Asya Fateyeva has engaged with Bach’s oeuvre since her youth, albeit at a disadvantage to many of her colleagues- the Thomaskantor wrote no works for the saxophone. This has not put off the young musician, who was voted Best Female Newcomer at ECHO Klassik 2016: her latest release “Bachiana” featuring works by J. S. Bach and Heitor Villa-Lobos prove her to be not only a virtuosa of her instrument but also a gifted arranger. She is ably supported by the inspired Wurttemberg Chamber Orchestra of Heilbronn under its principal conductor Ruben Gazarian. Asya writes: “Even when I was a child, I was really inspired by the music of Johann Sebastian Bach. That was when I began to play the piano, later I switched to the saxophone- and his music was simply always there. I think every musician feels the same; Bach’s universal language knows no frontiers and when you come into contact with his music, you sense that you are in touch with eternity.”