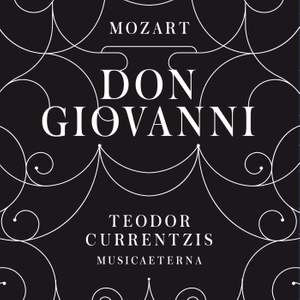 [this Don Giovanni] strips away many of our distorting performance habits, and the result is refreshing, revelatory and unsettling…Tiliakos is a dramatic Don…Loconsolo is vocally nimble and petulant... — BBC Music Magazine, Christmas 2016, 5 out of 5 stars More…

The release of Don Giovanni will complete the exceptional 4-year Mozart project Sony Classical has undertaken to studio-record the 3 Da Ponte Operas with Teodor Currentzis and his orchestra and choir MusicAeterna ("The next revolutionary sensation of classical music" - The Independent). Now finally comes Currentzis’ take on the cornerstone of the Da Ponte trilogy – which everybody has been waiting for. Mozart’s mighty and dark magnum opus – Don Giovanni. It promises to follow in the same vein as the previous two outstandingly received recordings Figaro and Così.

[this Don Giovanni] strips away many of our distorting performance habits, and the result is refreshing, revelatory and unsettling…Tiliakos is a dramatic Don…Loconsolo is vocally nimble and petulant as required…Gauvin has [Elvira] fully under control and her roulades in the quartet are ravishing. Do not expect a familiar ‘warm bath’ experience here; it offers an invigorating shower of fresh new insights

[Currentzis] his brisk, highly flavoured period-instrument approach is certainly notable for its keen observance of Mozart's clearly marked accents…and the vitality of the result is surely welcome. Vocally the cast is generally strong…overall it's an uneven achievement, but regularly a fascinating and frequently a worthwhile one.

What makes this a recording to conjure with, for me, is the way Currentzis harnesses the score’s manic energy and nails the crucial balance between absolute technical precision and a sense of underlying recklessness that could upset the apple-cart at any moment: rather like Giovanni himself, he seems to be constantly pushing the boundaries of what’s physically possible.

This is the last — and best — of Currentzis’s controversially explosive trio of recordings of the great Mozart-Da Ponte comedies...the singers here are new, including two exemplary Italians, Vito Priante and Guido Loconsolo, who make as much of the fast-moving recitatives as they do of the arias...Tiliakos is an outstanding Don, bassy in timbre and relishing his rolled Rs as much as the Italians.

[Currentzis is] sceptical, questioning, reinventing with bright lights and vividly colourful insights. Currentzis’s Russian orchestra steals the show with its incisive approach (but sack the clever-clever fortepianist). The ensemble is superbly tight.

his MusicAeterna orchestra is on scorching form...it’s not just the virtuosity that compels admiration but the stylistic subtleties too...As for the singing, that continues to be shaped by Currentzis’s belief that Mozart’s performers would have had very different voices — less “operatic”, more naturalistic or even folky — to those customarily singing Mozart today.